James Franco did a marvelous job playing a superb multi-tasker for the Samsung Galaxy 10.0 tablet ad. And that is perhaps why the company roped the brilliant actor, directed, published author and painter’s services to demonstrate just why the new Samsung Galaxy Camera is such a brilliant buy, not just for professional shutterbugs but also for the average person. The two minute spot was directed by the actor himself and presents a very realistic picture (pun intended) of just how versatile and handy the device is in tackling commonplace photography problems. 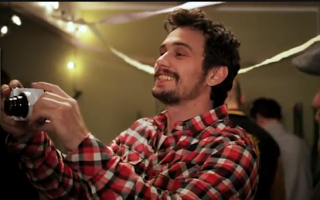 As a symbol of the tech-addicted current gen guy, Franco moves through a series of shots demoing the camera’s brilliance and futuristic features. In the first instance, he takes the picture of a couple where a photo bomber ruins the shot. Franco uses the camera’s instant edit function to crop the annoying third wheel out. The actor then moves to a party scene where he takes a group shot ad instantly sends to everyone freeing people from having to take separate images on a number of devices to capture the moment.

The star then uses his high tech camera to take a slow-mo video that lets him post a viral video in moments preserving hilarious moments. The camera’s instant cloud storage creds are demoed when a friendly photographer falls into the pool but there was no fear of losing images on the camera. The best face function allows Franco to literally get the perfect shot while the 21x zoom feature makes preserving precious moments easier.

Even though this is just a promo, Franco seems to have fallen in love with the brand and has even signed on to use the camera personally over the holiday season and sharing his videos and photos via his Twitter and Facebook pages.