An excellent smartphone with a touchscreen and Android OS available for just over Rs. 9000 is something exciting. But that is the reality one faces with the purchase of the new XPERIA X8 from Sony Ericsson. The XPERIA droids till now have either been high on the price list for its buyers or low on features. The X8 seems to have discovered the golden mean and through it, a niche for itself in the Indian cellphone market. It definitely has healthy competition in its price range but without the big egos around, it can afford to breathe easy and sell well. 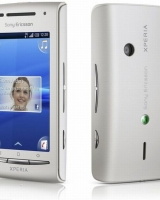 Calling and receiving calls are a breeze in the phone. Data can be easily transferred to and from the phone by simply ‘drag and drop’ functions without any extra software. The speakers and surprisingly loud and they produce good quality sounds – good news for the music enthusiasts. The built-in 600MHz Qualcomm processor works fine for simple tasks but starts to drag for graphic intensive activities. The Bluetooth and FiFi work fine and the phone has an A-GPS that enables map navigation. The Infiniti button links the user to related Youtube videos during the multimedia experience. The battery performance is average and decent. However, the camera is a disappointment. The pictures lack the ‘wow’ factor when taken during the day and night-photography is almost impossible due to absence of a flash.

Without stating the obvious stuff, let’s get into some unique features of the X8. Though it was released originally on the Android v1.6, it has been upgraded to a later-version OS – 2.1. The company has stated that there would be no more updates which means that X8 will not get any further speed improvement or support for Adobe Flash. The interface is unique with four customizable corners which can be used to personalize the home screen. This allows for widget launch on the fly by a simple finger slide. One widget is allowed per page and the number of pages provided is unlimited. The ‘Timescape’ is an awesome feature on the X8 which allows the display of Twitter, Facebook, messages and missed calls in a ‘rolodex-like’ format. The 320×480 pixels HVGA screen measures 3 inches and is very responsive to touch.

The X8’s design might make you confuse it to the X10 mini. However, the X8 scores with its 3-inch, capacitative LCD screen. Since it is TFT (Thin film transistor) type, viewing angles are not much of a hassle. The screen is visible even in broad daylight if brightness is pumped to the max. The phone has been designed for sensitivity and it registers even the slightest touch. It could be the closest rival to the iPhone in this regard. The white color that is used on the phone gives it a luxurious look and the three keys on the front have been elegantly designed and placed. On the right are volume controls and the camera-shutter trigger. The top possesses the 3.5mm standard audio jack, microUSb port and the power button. The behind is closed by a plastic cover which can be replaced to change colors.

The XPERIA X8 is one of the better-looking Android phones out there. It is a very light and elegantly designed smartphone that is available at a good price. The bad camera and the delicateness of the body may be its weak points but it is definitely not an unattractive phone.

Is unlimited text included in the data...

How to unlock phones?