Samsung Galaxy R vs. HTC Rhyme, which is better where it matters? 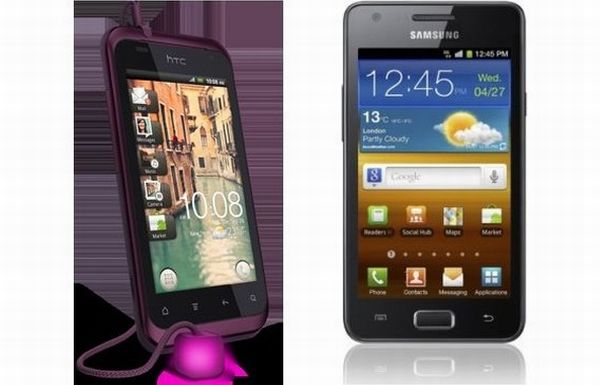 You finally have made plans to buy a smartphone and are confused about which one to buy? Don’t worry, in this post we are going to discuss about two of the best smartphones in the market – HTC Rhyme and Samsung Galaxy R. Buying one of them isn’t the easiest decision to make, however we promise that this post would be definitely helpful. The war of smartphones has really heated up – various brands, operating systems, attractive handsets, etc. makes your decision extremely complicated.

Now moving to the touch screen display HTC Rhyme has 3.7-inches Capacitive Touchscreen Display, while Samsung Galaxy R has 4.0 inches SUPER CLEAR LCD and Gorilla Glass Display. Samsung Galaxy R has been released in market in February 2011 and is easily available, while HTC Rhyme is expected to be released by October 2011. So, if you are planning to buy HTC Rhyme you have a little patience to wait for few more days.

Both HTC Rhyme and Samsung Galaxy R are 3G enable and offers Bluetooth and USB connectivity. It also offers GPRS and EDGE and W-Lan and Wi-Fi.

Both Samsung Galaxy R and HTC Rhyme have 5 mega pixel autofocus camera, which supports 2592 x 1944 pixels. However, Samsung Galaxy R offers various interesting features such as Geo-tagging, Face and Smile Detection and Touch focus, while HTC Rhyme has a LED flash. Also, both the smartphones have a secondary VGA camera for video conferencing.

The HTC Rhyme has an edge, not only because of its sleek looks, but also its exciting and useful functions. With Android 2.3 version (Gingerbread) your smartphone works at a faster pace. Included in its retail package is the amazing HTC Rhyme smartphone, wall charger sporting microUSB cable, 1600mAh non-removable battery, 3.5mm headphones, desktop charging dock, lighted indicator charm, and user guides.

HTC Rhyme is black in color and comes with attractive box packaging. The lighted indicator and earphones gives it a monochromatic look. The smartphone is well made and comfortable fits in various types of hands.

Detailed guide to the all beautiful HTC Rhyme Smartphone

Motorola Droid Bionic vs. HTC Thunderbolt – Which is better for you?