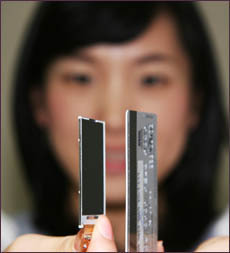 Samsung has broken its own record of the slimmest LCD developed for cellphones.

Earlier the company had developed a LCD that was just 0.82mm-thick, but the latest from the company is a mere 0.74mm-thick.

This means that the company will soon make cellphones even slimmer.

As a reference Samsung’s Ultra Edition phones that will be released this spring will have a monstrous 1.9mm-thick LCD screen.

Samsung i7110 will impress multimedia lovers

Seen the iPod-inspired iPhone? Get ready for...