They say that sometimes a little is more than one can ask for. The Samsung C3330 Champ 2 is the successor to the Samsung C3300K Champ. Following its predecessor’s footsteps, the Champ 2 offers a touchscreen, social networking, a 2MP camera and stereo speakers for an exceptionally low price. Even with the price, you won’t see everybody running around with a Champ 2 in their pockets; and why is that? Well, the features the phone boasts are not top-notch. First off, the camera is not a very high end variant and absence of 3G and GPS are some inexcusable omissions. It may not be an ideal phone for adults but it is the best phone for the young generation. The C3330 will get them started with a touchscreen experience before they can move on to more high-end phones. For starters, it will get them started with decent internet connectivity and social networking. The new Touch Wiz UI v2.0 also adds that spunk to the phone’s overall appeal. It can support up to 16GB of external storage so you can carry your music with you wherever you go. 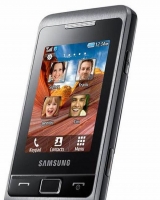 To clear up any misconceptions, the Samsung C3330 Champ 2 is no Galaxy SII! But it flaunts an amazing set of features when compared to phones in the same price category. The phone supports Quad band GSM and EDGE. It has a 2.4” TFT resistive touchscreen with a QVGA resolution of 240X320 pixels. Pixel density is 167ppi supporting 256K colors. The Touch Wiz UI supports widgets. The onboard memory is 20MB and Samsung ships the phone with a 1GB MicroSD card. The 2MP camera is not exceptional but clicks decent pictures. It has smile detection and records videos at 15fps in QCIF. The media package is great. The Samsung C3330 has FM radio with RDS and a decent media player with DNSe. The sound clarity of the loudspeaker is great.

The Samsung C3330 Champ 2 has a 2.4” touchscreen which is more than enough for general use. The screen is suitably bright and somewhat usable in direct sunlight unlike the C3300K. The phone is sturdy yet lightweight and quite user friendly. The build quality is good enough to ensure that the phone does not come apart after a fall. The back cover comes with a matte finish for better grip, however, it won’t survive frequent opening and closing. The outer casing is a glossy plastic that attracts fingerprints. At 96 x 52.6 x 12.2 mm and weighing in at a meager 79.1gms the phone is quite compact.

In terms of demographics, the Samsung C3330 Champ 2 aims even lower than the recently launched Corby II. The phone disappoints with its poor screen and the absence of 3G support. Still it has some fun features and is worth its price. Being a phone for the young and the fast, the phone is quite sturdy and cheap (so don’t worry about it falling or getting lost!). Parents looking at the Champ 2 for their kids will definitely want to compare it with phones in the same price category, but the price is slated to come down in the coming months. However, there are better phones in the market at the same price. However, if you are looking for a basic touchscreen to start things off or use it as your alternative phone then this is definitely worth a look.

Can you solve the text message problem...

How to unlock GSM phones?

Is it fine to make cell phone...

Where can I get hp mouse driver?

How to use your Smartphone to become...