Samsung is doing everything within its power to pile pressure on the LG Cookie. So, the Star series from Samsung is set on a head-on collision course with LG’s Cookie series. Samsung has announced a new phone, the Samsung Star II DUOS, which is a Dual SIM GSM Smartphone for people who look for a feature-packed, dual SIM touchscreen phone. The Samsung Star II DUOS has been customized with version 3.0 of Samsung’s Touch Wiz UI and also has 3D sound effects. The Star II duo scores in both the looks and the performance department. 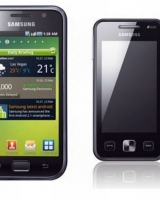 The Star II Duos comes equipped with Wi-Fi connectivity. The phone also comes preloaded with mail to give you easy access to popular mail services like Hotmail, Yahoo, and Gmail. The Bluetooth is A2DP v3.0 which makes pairing and/or data exchange with other devices/phones quite fast and convenient. The 1200 mAH battery means that you will have ample juice left even when the Samsung Star II Duos has 2 active SIMs that consume more battery. The phone has a dual standby feature hence the SIMs can work concurrently. The Samsung Touch Wiz user interface has been tweaked to work with dual SIMs.

The Star II Duos has something for everybody. It comes pre-loaded with social networking apps like Twitter and Facebook, so that you remain connected wherever you go. It also has a Document Viewer app so that you can handle office documents on the go. The phone has FM radio with RDS and the media player has DNSe with 3D sound effects ensuring a wholesome media experience. The camera is a 3.2MP fixed focus variant that clicks decent pictures and records video at 15fps. Just like the Star Nxt, the Star II Duos also comes equipped with WiFi. The Bluetooth version has been upped to 3.0 and the headphone jack has been changed to the more popular 3.5mm variant. It also supports quad band GSM, GPRS and EDGE, but no 3G, which is a sad omission for this telephonic all-rounder. The screen is reasonably large at 3.14”. The screen is a capacitive touchscreen with a resolution of 240X320 pixels. The home screen has widgets and a quick access panel that makes opening apps really fast. There is another interesting feature called the QuickType T9 trace, which is almost like Swype. The onboard memory is 30 MB and the external storage can be increased to 16 GB. Unlike the Star Nxt, the Star II Duos comes with a 1200 mAH battery which gives a decent talktime and stand-by time.

The Star II Duos will not get too many brownie points in the looks department. The design is a drab box like candybar form. The phone weighs in at 100g that means that it is quite light compared to the Star Nxt and the LG KP500 Cookie. The back cover has a matte finish that makes it easier to grip. The phone has two physical Call and End buttons and a D-pad navigation button. The 3.14” screen takes up most of the body. The 240X320 pixels resolution is of decent quality, which has been made appealing with the Touch Wiz UI v3.0.

Samsung had announced long back that they expect to sell a million Star series phones every month and hope to achieve the “10 million units sold” by the end of the year. Most companies laughed it off as being overly ambitious. But Samsung’s responsive touchscreen, great features, the tweaked JAVA OS (that installed .jar files directly) and a low market price made that dream possible with the Star and the Star Nxt. Now it’s Star II Duos’ turn. Whatever maybe the statistics, the users have the last word. The Star II Duos is a loaded phone with great connectivity and has that bang for buck advantage over most phones. The design of the phone is passable but considering that there aren’t too many phones like this in the market, the Star II Duos is well worth a try.

Where i can get cheapest cell phone?

Mobile Script Concept: The next generation of...

How can one complain against Boxee box’s...

Is there any problem in Samsung’s touch...