written by Community Writer | Community.Drprem.com May 17, 2012

Rechargeable batteries play a major role in all types of electronic devices like laptops, PDAs, GPS, mobile phones, etc., to mention a few. With the current technologies, users had to plugin their devices to an electronic outlet to recharge their batteries. The highly renowned mobile phone manufacturer, Research In Motion has come up with an innovative idea to recharge batteries on the move, especially the ones on the mobile phones without the need for any external power cord or electrical connectivity. In fact, the company had filed a patent on their innovative idea along with explanations. 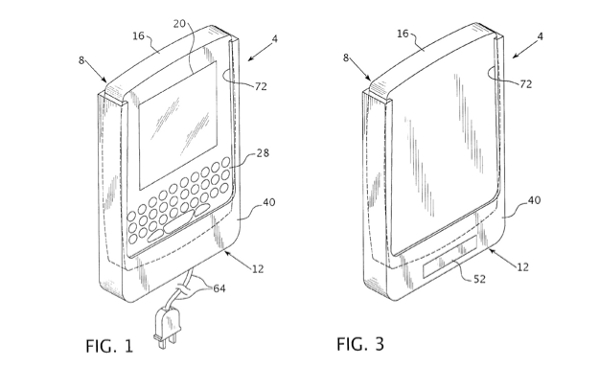 As mentioned earlier, the use of batteries have several applications with all sorts of electrical gadgets. Prolonged uses discharge the batteries even before the end of the day. RIM’s patent proposes a holster that withholds a secondary battery. When this holster is electrically connected to the mobile phone or any other electronic device, the secondary battery recharges the default battery that’s present in the handset. They have been designed to activate whenever the level of charge in the primary battery falls below a preset value. On the other hand, if the charge level in the holster falls below a predetermined level, then the primary battery from the handheld electronic device charges the secondary battery in the holster, only if the primary battery in the device have a higher charge level. There are about 2 to 3 level of charge that determines which battery to charge first, when the two devices are connected together.

When the holster is connected, it might block the handset’s output units. If a mobile phone is connected by means of a holster, it would cover the significant output units like the loudspeaker, message screen and light indicators, in some handsets. In order to avert such inconveniences during the middle of the charging process, the holster includes a micro-controller that receives information about alerts and notifications from the electrical device and transfer the same to the users by means of a separate loudspeaker and other indicators that are designed on the holster itself. The microprocessor in the electronic device works in accordance with the holster to communicate the received alerts and notifications successfully. Coupling the external holster to the primary electronic device is designed to be a child’s play. Mobile phone users could very well realize the benefits of this apparatus, as it won’t let them run out of charge while making urgent calls or during important meetings.

The advent of rechargeable batteries have benefited several industries across the world. As technology improved, the size and power of batteries became the significant factors. Fortunately, the batteries that are included in the present generation’s handheld electronic devices are much lighter with higher power capacity as well. Therefore, users expect holsters to possess higher power capacity and compact designs. As mobile phones send and receives several waves during their operations, they demand higher power requirement, especially during the transmission periods. Research In Motion has rightly proposed its design about a holster that might revolutionize the mobile phone market in the near future.

Firefox for Android graduates to beta