Home Off Beat Moto A910: Finally gets FCC nod
Off Beat

Moto A910: Finally gets FCC nod 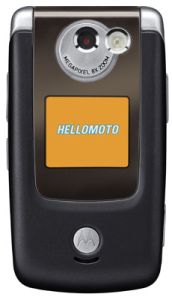 FCC have finally given nod to Motorola A910 a Linux based clamshell phone flaunting a 1.3-megapixel camera.

Like Nokia 6086 this phone also has Wi-Fi transmitter with UMA or unlicensed mobile Access (UMA) which will help the user to make both cellular and VoIP calls and as this phone is headed for T-mobile stable it will make best use of operators [email protected].

The phone is slated for Q2 release in 2007 but just to brush up your memory earlier it was scheduled for Q1 2006 release.

Moto A910: Finally gets FCC nod was last modified: May 22nd, 2013 by Community Writer | Community.Drprem.com

An attempt to make a mobile phone...