If we believe the records from a private phone network operator in India, Barack Obama, President of the United States and one of the most recognizable people on the face of the planet, has an active cellphone connection which he has been actively using in the relatively small town of Nalgonda in the southern part of India. Sadly, the man whose nationality has already been under intense scrutiny was spared the horror of being asked to prove his American-ness all over again and the connection was discovered to be held by a 22-year old Andhra Pradesh native M. Prasad. 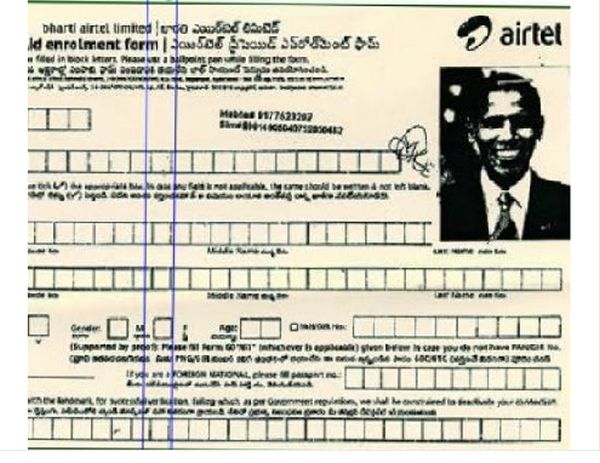 We’re sure the staff member from the cellphone company who discovered the discrepancy must have been thrilled to bits when he/she first saw Barack Obama’s photograph appear on a document requesting a cellphone connection though the ASL (age, sex, location) of the customer must have given the error away. Upon investigation, it was found that the man had provided a file photo of President Obama to obtain a cellphone connection since he didn’t have a photograph of himself handy when he was filling the application for the connection. The retailer who approved of the picture (in the image Barack Obama is photographed with the US flag draped behind his right shoulder) has still not been found.

The report regarding the hilarious error appeared in a leading national publication and is indicative of the grave breach in security that is caused by retailers and customers flouting laws and security measures when applying for cellphone connections. Buyer’s identities are often not verified by retailers looking to survive in a very competitive market while customers too find it easier to bypass the law than provide valid IDs when getting cellphone connections. For now, the service provider has disconnected Mr. Prasad’s cellphone connection even after he approached them with a legit proof of identity.