South Korean electronics giant LG officially unveiled its latest smartphone with Prada on December 12, 2011. Also known as Prada K2 and LG P940, this smartphone supports both 2G and 3G network. The dimensions of this sleek and stylish smartphone are 127.5 x 69 x 8.5 mm. The 4.3 IPS LCD touchscreen of this phone supports 16 million colors. 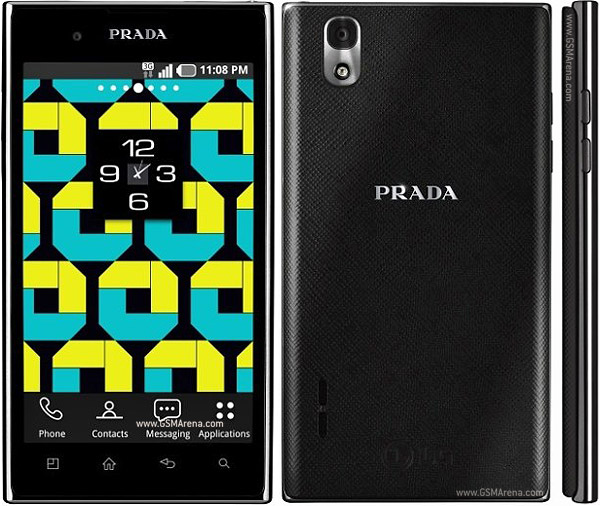 This phone features a loudspeaker and 3.5mm jack. The internal memory of the LG Prada 3.0 is 8 GB and the memory can be expanded up to 32GB using microSD card. Featuring WLAN and Bluetooth connectivity, this high end phone is perfect for business use. The 8 MP primary camera of this phone features autofocus and LED flash. It can record video at [email protected] The 1.3 MP front-facing camera of this device can be used for video chatting and web conferencing.

This phone runs Android OS Gingerbread. It has TI OMAP 4430 chipset and dual-core 1 GHz Cortex-A9 processor. This phone features accelerometer, proximity and compass sensors. This phone comes equipped with FM radio with RDS. It has A-GPS support as well. Available in Black color, this phone has got a very attractive look. The phone features Li-Ion 1540 mAh battery.

This super slim droid has got hot-looks and its chipset is quite powerful. The 4.3″ NOVA display of this Android-run smartphone sports WVGA resolution. This NOVA screen of this smartphone is better than the one which LG is offering with its highly successful Optimus Black handset because it has 800 nit brightness. The TI OMAP4430 chipset and 1GHz Cortex-A9 CPU used in this phone is perfect for heavy lifting. The 8.5mm body of this smartphone gives a super cool look to it. The LG Prada 3.0 is expected to receive Ice Cream Sandwich upgrade in 2012. LG did not announce the release date or the price of this smartphone yet, but it is expected that the company will announce the information related to price and availability of this smartphone soon.

The devices which LG and Prada had released so far have done good business and it is expected that the Prada 3.0 would take this legacy forward. This sleek device will definitely attract those who love to use slim handsets loaded with modern features. It is likely that the success of this stylish Android-run phone would further strengthen the partnership between LG and Prada. On November 24, LG renewed its partnership with Prada and during the signing of fresh partnership ceremony in Seoul, these companies had announced that they would soon unveil the LG Prada 3.0.

The LG Prada 3.0 is the third handset manufactured jointly LG Prada. The Prada phone was released in 2007 and the second handset was launched in 2008. The LG Prada phones are designed exclusively for fashionistas and LG Prada 3.0 is also meant for those who are willing to dig deep into their pockets to buy fashion phones. Besides the phone, the customers will also get an opportunity to lay their hands on a set of Prada accessories including a Bluetooth headset and a docking station.