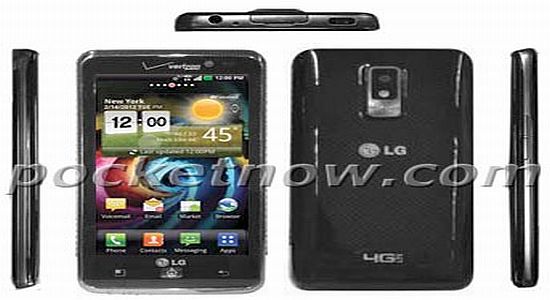 Whether you praise the rumor bugs or the ears that do not take rest, the recently unveiled smartphone from LG is however managing pretty well to intrigue performance seekers. Although the specification list is yet to be disclosed in the sunlight, the next 4G LTE phone looks quite compelling through whatever the features that have been revealed. The new Android-powered device is touted to be another feature-blessed smartphone that will head towards Verizon Wireless.

Designed aesthetically, at least that what appears from the surfaced pictures, the Spectrum will apparently come integrated with the powerful 1.5GHz dual core processor which enables the system to deliver a blazing fast user experience. The LTE-equipped smartphone will also take very good care of your need for cherishing good moments. There’s an incredible 8 megapixel camera for crystal clear pictures and the ability to record videos in 720p high definition resolution. It goes without saying that the integrated camera will further feature a slew of advanced perks designed to leverage your entire photography experience.

The top surface features a 3.5mm headphone port (probably) while the left surface gets the space for a volume button to increase and decrease the sound volume. The back end sports a high end camera towards the top whereas the LG logo settles down just beneath the camera. Based on the new Android 2.3 Gingerbread, the smartphone is further anticipated to enhance the user journey through the speedy 4G LTE connectivity.

Seemingly, the device also looks to be quite slender and slimmer compared to its other predecessors. The stylish looking handset however will foray in a sturdy yet elegant chassis doused in sheer black to complement your exquisite taste. At the same time, the solution showcases LG’s expertise and experience in carving mobile devices with utmost attention and detailing. The design language of the company remains the same yet exclusive – since one can seamlessly spot a convenient to use button layout and smooth interface. Nonetheless, the latter emerges to be quite similar to the interface of other phones available on the market.

Since the entire specification list for LG Spectrum is still under the covers, it may be a bit too early to comment on the areas that might require improvement or changes. For now, if there’s anything that we could easily, then it’s simply to hang onto our hats and wait for LG to reveal some interesting tidbits on their latest smartphone.

The company is yet to divulge details on the new LG Spectrum’s price and availability. So stay tuned to the bulletin given that there’s indeed a lot to come from the LG world.