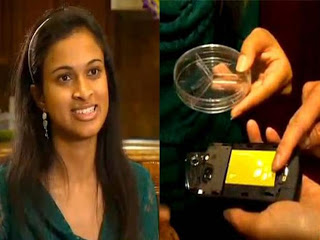 Are your cellphone’s reduced standby hours bothering you a lot? How about something that can charge it in 20 seconds and hold the charge for a longer period of time? Yes, your dream of having a smart phone with longer battery life and faster battery charge is now a reality! An 18-year-old Indian-American girl from California has come up with a super capacitor fast charging device that has the capacity of charging a phone completely in 20 seconds. Isn’t that awesome?

Esha Khare from Saratoga, California was awarded USD $50, 000 along with the Young Scientist Award by the Intel Foundation for developing this tiny device that has the capacity of holding a lot of energy in its tiny space and charging any cellphone very quickly, i.e. within a span of 20-30 seconds. Her invention has attracted attention of various tech moguls like Google who happened to appreciate her work.

According to Esha, she was inspired to work on this project, as she herself faced the problem of her cellphone’s dying batteries. According to her, this device is expected to handle 10, 000 charge-recharge cycles, which is 10 times greater in comparison to normal batteries. As of now this smart gadget has only been tested on LED lights but seeing its potentials it can soon be seen powering several other devices burgeoning in today’s world.

According to sources, this device is very flexible and can easily be used in rollup displays and clothing and fabric making its prospects of applications even wider in comparison to the batteries. This invention is going to revolutionize the gadget world to a great extent as it can be further molded into something that can power bigger instruments like cars and machineries.

Esha Khare is now flooded with offers for her amazing leap in the science industry, which various giant multi-national corporations failed to come out with. As she is heading to Harvard, she intends to work at the nanoscale to make significant advances in the fields of science and that she would be setting the world on fire from here.

Where can one get cheap HTC cell...