So the sight of a set of nimble fingers dexterously maneuvering the strings of a guitar really gets you going eh? Unfortunately you could never get around to fretting your own majestic motifs… Well, here’s something that’ll prove to be a kick start to your aspirations. Presenting Gtar, one of the most versatile and smartly featured music accessories for your iPhone. 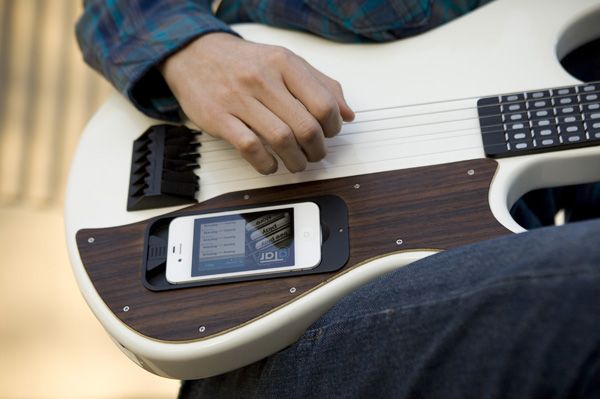 Learning to play uninhibited guitar takes a lot of practice. What the ears and the heart want, hands just don’t produce overnight. This tenure of struggle can be minimized on the Gtar by introducing the iPhone in the shape of its (Gtar) very own brain. In the beginning, it’s like being served with a few cheat codes to get a head on start on the fun. You may not be a champion, not ever an intermediate, but if you possess a fair understanding of the strings and frets, then don’t be surprised if you easily work your way around playing your ever-coveted tune. Alright, so how do you jet pack your way from just “fretting” to actually fretting on the fingerboard? Here goes. The Gtar is built to assist you interactively with studded LEDs on the fret/finger board which indicate where to fret next. So following the tune is as easy as “following the light.”

The app comes with a set of preloaded tunes the notes of whom are sequentially depicted on the fingerboard via the LEDs. So as you commence chasing the LEDs with your fingers, you start hearing those tunes being played by you. Now surely you’re thinking that this little distraction can only be fun for so long. To cut the monotony, Gtar has levels of playing, from easy, medium to difficult. While on the easy mode, there’s no need to fret the strings at all! All you need to do is play the correct string and instead of producing the sound of the “open note” or the note which sounds without holding on to any fret, the string will resonate to the note required by the song. So it’s pretty much a random run between the six open strings.

When you’ve had your chuckles with the easy setting, move on to the medium level. While playing on medium, you will have to accomplish the additional task of actually fretting the strings but without worrying as to “which fret.” Whatever fret you pick at random, will produce the desired note. This feature is being termed as “smart play” in the Gtar. Finally, while using the hard mode, the LEDs will be there to guide you throughout. Nonetheless, the notes you hear will be the notes you actually play. So having a background in guitar playing does necessitate itself to an extent in the hard mode. Eventually, we come to the “free play” mode where your guitar acts and behaves like a regular electric guitar but still takes advantage of the iPhone integration. The phone now acts as a digital processor and you can use it to toggle between various effects and tones, acting like a virtual stomp box.