The first LTE Windows smartphone from Samsung, the Samsung Focus 2 is out in the markets now coinciding with the release of the Apple iPhone 4S. Samsung claims that its new phone is fast, versatile and capable of providing the best possible entertainment, productivity and social networking. In short, it positions the phone as a rival to the latest iPhone. But how much of a challenge does it really pose? 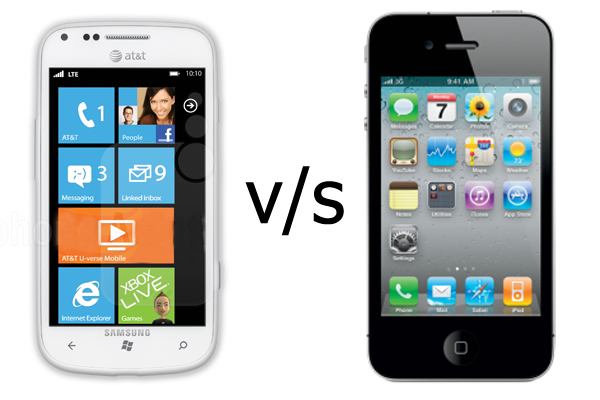 Both the phones lack a slot for external storage cards. While the Focus has an internal memory of 16GB, the 4S boasts of a 64 GB one – four times greater than its rival.

The 512 MB RAM is a common factor on both the phones. The iPhone 4S has a dual core Cortex A5 processor and the Samsung Focus 2 has a powerful single-core Scorpion processor. While the 4S beats the Focus with its cores, the Focus works much faster because of its 1.4 GHz capacity compared to the 0.9 GHz of the 4S.

When it comes to the camera, the iPhone 4S seems to beat the Focus 2 hollow! The former boasts of an 8 MP primary camera which is capable of HD recording at 1080p. The phone also arrives with movie support. In comparison, the Focus only has a 5 MP primary camera which records video at 720p and has no support. The secondary camera on the Focus 2 at 1.3 MP is definitely higher resolution compared to the 0.3 MP on the 4S. But who would want such a resolution for video chat where less is more because streaming becomes easier?

While the audio players on both the phones are almost of a similar quality, the Focus 2 comes with a FM radio which the 4S lacks. This gives a slight edge for the Widows phone over the iPhone. Both the phones, however, arrive with the universal 3.5mm audio jack and both lack an FM transmitter.

Both the phones arrive with in-built accelerometer, compass, gyroscope and GPS. However, the GPS on the 4S is assisted while it is not on the Focus 2.

Li-ion technology has gone into the creation of batteries for both the phones. While the Samsung’s 1750 mAH Li-ion results in 6.5 hours of talktime, the 1432 mAH Li-Po battery on the Apple phone gives up to 14 hours of talktime. In standby however, the Focus 2 has a slightly better performance of 10.4 days over 8.3 days of the 4S.

The Samsung Focus 2 is smaller, lighter and thinner than the iPhone 4S. When it comes to the screen also, the Focus 2 is larger in size and brighter. However, it must be said that in terms of resolution and sharpness, the iPhone slightly scores over.

Neither of the phones support Adobe flash. But the iPhone 4S’s web browser at 811 ms is fairly faster than the browser on the Samsung Focus 2 which is actually1582 ms. However, technically the Focus 2 is superior.

The Focus 2 is a GSM phone while the iPhone 4S supports both GSM and CDMA. Both are on par when it comes to EDGE and GPRS but while the Focus 2 scores with a 21 Mbps HSDPA over the 4S’s 14.4 Mbps, the 4S gets trumps in Wi-Fi features like Wi-Fi hotspot.

There is not much of a discussion here. Both phones lack a physical keyboard and the capacitive touchscreens are equally sensitive and responsive.

Though on the face of it, some features of the Samsung Focus 2 seem to score over the iPhone 4S, a careful scrutiny reveal that these are not features and factors that are vital. In the vital stats, the 4S beat the Focus 2 hollow, fair and square. The price would have been the only differentiator but with the Samsung Focus 2 being priced almost at par with the iPhone 4S, we have to hand victory to Apple over Samsung!