There have been sporadic incidents of mobile phones exploding from time to time. Though these instances are rare, they are scary and create panic. There are cases of minor injuries, but several have been quite serious and one or two people have died too, as their phones exploded suddenly. This brings to mind how and why do cell phones explode? And can it happen to you and me too? Let’s find out: 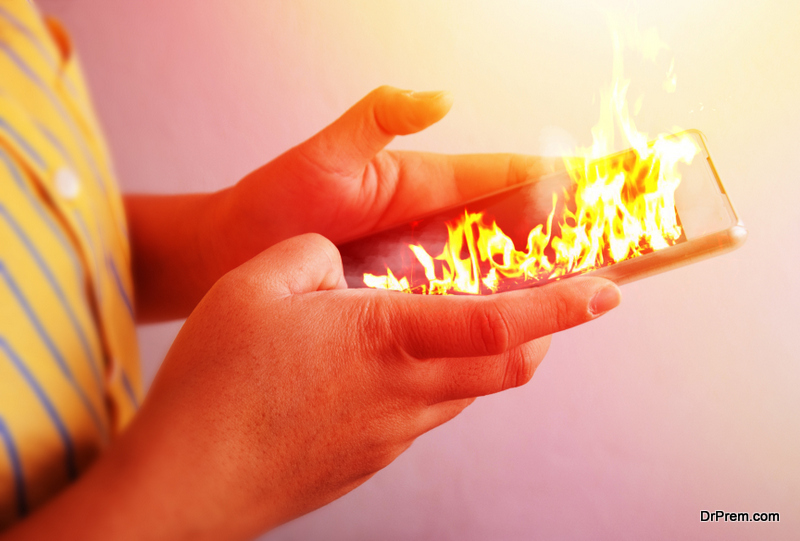 It is a fact that cell phones explode, but not cell phones will explode. In fact, considering the number of cases of phones exploding, we can safely say that most phones will not explode, especially if you take a few precautions. And if something is wrong in the manufacturing itself, then it would be a case of sheer chance of purchasing a defective piece!

Why do cell phones explode?

The reason for phones exploding is battery explosion. The main cause is known as ‘thermal runaway’.

In the battery system of your phone. Separators are there to prevent the electrodes from getting connected, but if the separators malfunction, then the electrodes will come into contact with each other and there might be a smartphone blast.

The Li-ion batteries in cell phones explode when the Li-ion cells reach critical temperature, or you may understand it as their ‘boiling point’. If one cell reaches this critical temperature due to damage, poor manufacturing, overcharging, external heat, etc, then exothermic breakdown occurs, and the cell releases a huge amount of heat. This starts the thermal runaway process as all the other cells also start releasing heat, hitting critical temperatures. When this happens, the battery might sizzle out, burn up or explode.

If you notice your phone battery has swollen up, ditch it at once and get a new battery, or it may blow up in your hands!

Battery explosion can occur due to overcharging. Cell phones explode unexpectedly, even while charging and talking. Normal charging will not cause your battery to overheat and explode. But if you habitually leave your phone to charge beyond 100% every night, then the battery might degrade over time, or get swollen up.

Many experts claim that new phones are able to automatically cut off the electricity supply once the phone is fully charged. But as we ordinary mortals are never informed by companies, its best not to keep the battery on charge for a prolonged period of time, day or night.

Do not do anything which will heat up the battery, such as keeping it under your pillow.

Old chargers work with new devices and super-fast chargers work with old devices. Whatever kind the charger is, you should always stick to chargers from known brands. Buying one which is certified by the phone manufacturer is the best choice for your phones, as they are most compatible, durable and reliable and there is less chance of a smartphone blast.

Uncertified chargers have been known to generate excessive heat, and thus cell phones explode. But cheap chargers gradually damage the phone, without you being aware of it, and it usually breaks the phone before explosion.

Check the reviews of the charger online before you buy it. If it has many negative reviews, then look for another compatible charger. For Apples phones and devices, check for MFi certified chargers. Good quality wireless chargers have Qi-certification.

Don’t leave the cell phone in your car

Li-ion batteries discharging at high temperatures can make them unstable. If you leave your phone on the dashboard with hot sunlight burning down on it, you may be helping the phone to deteriorate. The phones may not explode (though cannot say this for certain with cheap, untested brands!), but they will get ruined or produce gases such as carbon dioxide and oxygen. These gases cause the battery to swell up like a balloon, creating pressure. This pressure can make changes in the composition of the battery.

There was an incident which happened to a passenger on a plane – his phone started to glow and produce smoke. Luckily, the flight attendant carried out the necessary safety procedures and was able to prevent an explosion.

Most phones will not explode if you leave them, or keep them on a sunny spot on the seat next to you, inside hot cars, for a day. But if you do this on a regular basis, then the phones have a pretty high chance of heating up, leading to thermal runway.

Take care not to stab or bend your phone. This could rupture the battery, and reaction between Li and oxygen will occur, leading to a blast. So blasting phones are not fiction, but they are extremely rare. Following a few precautions and researching any phone or battery before buying will help to stay safe from phones exploding in your hand.