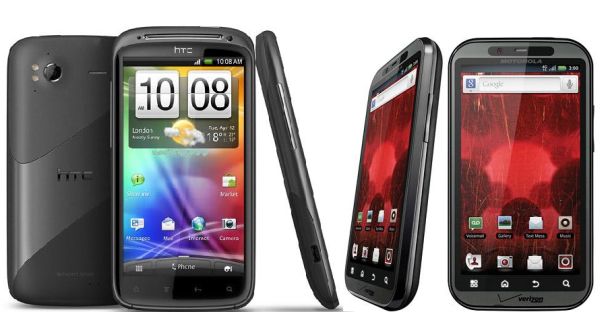 Both HTC and Motorola are two cellphone giants famous for their Android phones. The Android operating system technology along with touch-screens and several other goodies, make their cellphones a treat to own. What if both the companies launch cellphones that are nearly as good as the other? Which one will you select?

Check out the faceoff between Motorola Droid Bionic and HTC Sensation and reckon who the winner is!

HTC Sensation is a smart-phone which is dubbed as the latest multimedia super-phone in the market. Its premium design along with powerful performances allures you to buy this phone. This easy to use entertainment phone is a latest offering by HTC that runs on Android. The phone has an LCD touch-screen of 4.3” with 1 GB internal storage expandable by micro SD card. Its high display resolution of 960X540 pixels makes it a great option along with the 8 megapixel autofocus camera. The operating system is Android 2.3 which is another latest offering. Several reasons make this phone a great option which includes the audio capacities of this cell phone along with its high resolution video recording capacity at 1080 pixels.

Motorola has been known for the cell phones designed with sleek and slim body and Droid Bionic is no exception. With its 4.3 inch High Definition display, this phone is as sleek enough. The features are plentiful along with digital 8 megapixel camera and double dual processor that makes it as functional as a laptop. Its long battery life is a cherry on the top. The phone comes with 16GB storage that can be easily expanded to 32GB using a microSD card.

Winner: Both of them as they support similar displays along but Motorola has a better operating system, a higher version than the HTC Sensation.

The HTC Sensation supports a new user interface that is a hit with the users. The home screen supports a range of new widgets that makes using this phone even more easily. Now you don’t have to move through several icons just to reach to your e-mail, you can directly open the tab and read the mails. Apart from this, HTC Sensation also has visual weather applications and better maps for faster and safer commuting among different places. Since, the phone is laced with the Android operating system. Therefore, you can find several interesting things to do on your cell phone. The walls on the screen can spin if you flick the touch-screen. There are several new themes and a whole new screen-lock system for better safety. Internet 3G facilities and faster web browsing is available on the 3G model.

The best thing about this cell phone’s processor is the amalgamation of dual core processor and 4G LTE. Verizon’s has bought out 4G LTE phones in the market, but this is the first time that two of the technologies have been combined for faster processing. Being the thinnest LTE Smartphone in the market is an added advantage for Motorola Droid Bionic. But at the same time, the screen isn’t too appealing because of the cross hatch pattern created by the PenTile display. Still, the phone has a really bright screen making it usable in even the bright sunlight. Battery life is good if you switch the LTE mode off. Download speeds of 13 Mbps is add on.

Winner: Although Motorola Droid Bionic has two processors put into work, still HTC Sensation is better owing to its better screen. Both of them have sleek design but the grainy screen of Droid Bionic makes it lose the round.

Winner: Both of them.

Winner: Motorola Droid Bionic claims to have a better camera with digital zoom; still HTC Sensation wins this round owing to its better screen and picture viewing. Even though both the phones offer similar definition in pictures, yet picture viewing is a better experience in HTC Sensation.

The Verdict: Motorola Droid Bionic is a good option for those who are using or aim to use Verizon, as this is certainly a better upgrade with its thinnest LTE and better processing. But seen on an overall level, then HTC Sensation is a far better choice owing to its faster processing, good battery life along with better web browsing, easy user interface and attractive touch screen. Motorola Droid Bionic is costlier for the kind of services it offers while HTC Sensation is a value for money.

The Motorola Droid HD aka RAZR or Spyder, what you should know