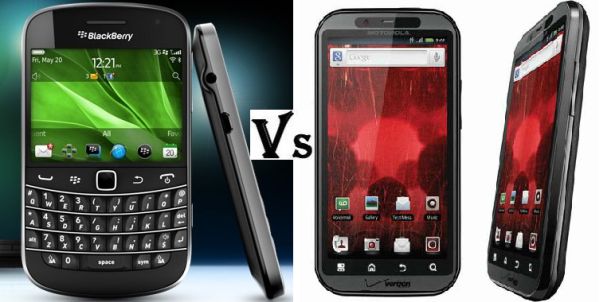 BlackBerry Bold 9900 is a fresh version of Research In Motion’s BlackBerry smartphone lineup. The device is up with a QWERTY keypad and touchscreen, which makes it a special product. The new BlackBerry phone is there with an excellent keyboard, outstanding touchscreen and the latest BlackBerry OS 7.0. However, in comparison with many Android phones and Apple iPhone, BlackBerry Bold 9900 does not live up to the expectations.

BlackBerry Bold 9900, as mentioned above, is up with BlackBerry OS 7.0, the new version of the famous BlackBerry OS. But Motorola Droid runs on Google Android OS 2.3.4 Gingerbread. A competition between Gingerbread and Blackberry OS will indeed make the former a winner, because it is more feature-rich and advanced rather than the latter.

Thanks to its Li-Ion 1230 mAh, BlackBerry Bold 9900 offers up to 6 hours 30 minutes talk time. In the meantime, Motorola Droid Bionic is far advanced with a Li-Ion 1735 mAh that offers up to 10 hours and 40 minutes talk time. Long battery life is a great feature that can entice most of smartphone customers. All customers wish to operate their handsets without the frequent need to charge.

Based on this comparison, the winner of Motorola Droid Bionic and BlackBerry Bold 9900 is certainly the former one. The advanced Android Gingerbread smartphone noticeably stands out its rival in all major parameters from screen size to battery life. More memory and better camera make Droid Bionic an incredible product. The device is blessed to have Gingerbread as the operating system.

Motorola Droid Bionic has been much late to the market after its official announcement in January this year. The Libertyville technology maker, which was recently taken over by Google, showed off Droid Bionic as the first dual core 4G LTE smartphone on Verizon at CES 2011. The device was then set to appear in market in April. But the company unprecedentedly delayed its release for some so-called hardware and software modifications.

Of course, as a result of the modifications, we now have an incredible dual core Android smartphone on Gingerbread. But many impatient customers went for alternatives like BlackBerry Bold 9900 and other Android smartphones during the period. RIM, on the other hand, is in attempts to retain its previous dominance in smartphone market with a far advanced touchscreen plus QWERTY keypad version of its BlackBerry smartphone.

5 Windows Phone 7.5 Mango features that rock and 5 that don’t