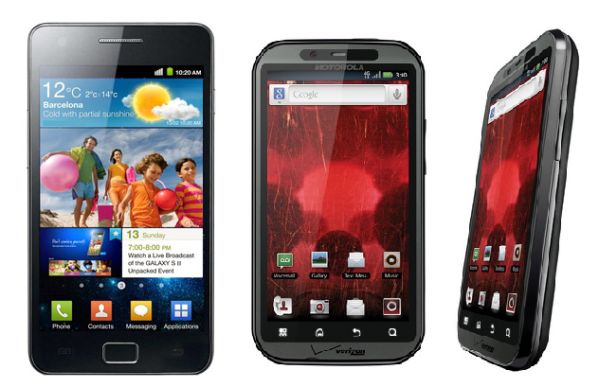 You have 16GB onboard storage, 1GB RAM and 2GB ROM in Droid Bionic. The smartphone also supports a microSD slot that can load 32GB and 16GB memory sticks. Galaxy S II is with 16GB and 32GB internal storage options. 32GB and 8GB supportable microSD slot is also there.

Both smartphones highlight the latest version of Google Android mobile OS, Android 2.3 Gingerbread. Bionic is on Android 2.3.4, while Galaxy S II features Android 2.3. In fact, these two phones are among the top Gingerbread phones in market.

Winner: No winner. Both smartphones play on the same version of Android.

Droid Bionic and Galaxy S II have better cameras. You have 8-megapixel cameras on both the phones with auto focus and dual-LED flash. Galaxy S II mounts a 2-megapixel secondary camera, and Bionic has a VGA camera in the front for video calls.

Ultimate Winner: In most comparison attributes above, Samsung Galaxy S II, known as the best Android smartphone ever, wins over its Motorola competitor. We have better display, memory options and battery life on the second generation Galaxy smartphone. Of course, Galaxy S II has deeply penetrated into the smartphone market thanks to the above features. It has been aggressively fighting against Apple iPhone 4 in global markets.

Indeed, Motorola Droid Bionic is a grand smartphone. With many outstanding features, it can be counted as one of top Android smartphones. But Motorola’s unprecedented delay to come out after its announcement in January has certainly decelerated its popularity. In the meantime, the so-called Apple iPhone 4 killer, Galaxy S II, has done great in global markets. Samsung could ship millions of Galaxy S IIs soon after its official release in April 2011.

Most possibly, both Galaxy S II and Droid Bionic will get updated with Google’s latest Android version, Android 4.0 Ice Cream Sandwich. As per industry sources, the devices may either get updated to the new software; otherwise, there will be Ice Cream Sandwich models of the smartphones in next months. Whatever it is, technology consumers, especially the Android lovers, have a set of brilliant smartphones in racks, of course, including Galaxy S II and Droid Bionic.

Internal speaker of my sciphone i9 cell...

Tips to keep off unwanted calls on...

How to update HTC dream phone?

Can you provide me an update on...

Which is best in Nokia N-series phone?

What are the differences between old Google...