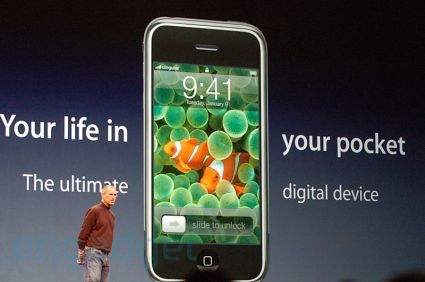 This story is part II of the earlier saga that is unfolding in the market and is bound to rip your heart so not for ones with a weak. It sure did make me feel angry and frustrated although iPhone is years away from Asia.

The heart aching thing is that according to iSuppli Apple will make an estimated profit of 50 per cent on every iPhone sale.

Just to be more precise the 4GB version that is set to be priced at $499 will have Apple making 49.3 per cent profit while the 8GB ($599) will give Apple a 46.9 per cent of your hard earned money. This is bossing the dynamics by Apple as the odds are in its favor. It knows that iPhone will sell like hot cake and it is also not the first time that these allegations have surfaced Apple sells its iMac’s and iPods also with very high profit margins.

Apple sure doesn’t believe in thing of masses but the LG KE850 and GooglePhone ‘Switch’ might make Steve Jobs think otherwise.

If the above figures quoted are correct there sure is margin of improvement and Apple can lower its prices if the competition hot’s up.

I have just one thing to say Steve STOP THIS VORACITY you have a good product PLZ make it affordable also.

Nokia gets the 6210 Navigator FCC approved

Finally Someone Sues Apple Over the Lack...