Cool and useful shortcuts for iOS 5 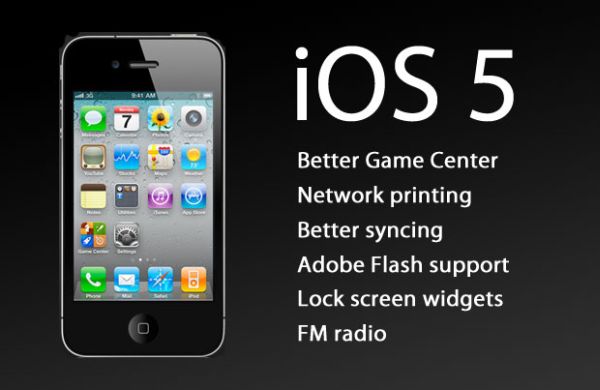 Apple’s latest OS for its hugely popular iPhone and iPad, the iOS 5, comes packed with several new and exciting features. The iOS 5 boasts of features that were needed by several iOS users. The new OS also has copy and paste facility. Paying heed to the demands of the users, Apple has introduced several shortcuts in the iOS 5. You need not swipe between home screens and sift through apps to do your work because you can perform several functions using the shortcuts. Here is a list of 10 cool and useful shortcuts for iOS 5:

The iOS 5 run iPad allows the users to enable new Multi-Touch gestures on their tablet device quite easily. The process is simple. The user need to go to Settings > General, and then turn on Multitasking Gestures. The user is allowed to Pinch to go to the Home Screen. The multitasking bar is revealed by an up swipe up, while left or right swipe is used to move between applications.

The iOS 5 features Siri, which is without doubt a very helpful personal assistant. In order to use Siri, you need to tap the mic button when you want to ask a question and this can prove tiring for some users. But those users should not lose heart because the iOS 5 has a shortcut for this well. All they need to do is head to Settings > General > Siri. After completing these steps just turn on the “Raise to Speak” option. Once this process gets complete, every time the user will raise the iPhone 4S to ear, Siri will activate automatically. After activation, the user can talk with Siri and use the earpiece to listen the responses.

This is a very useful shortcut for business people and those who do not want to miss a call during some serious meetings and discussions. We normally put our phones on vibration mode during high-powered meeting, but at times we really need to attend some critical call during important meetings. This iOS 5 shortcut comes very handy here because it allows the user to assign a unique vibration sequence to any person, which means that the user will be able to judge by the euphony of the vibration about the identity of the caller.

Different people have different preferences for receiving iOS notifications. Some users prefer audible alerts, while some are more inclined towards vibrating alerts. Then there are some who do not like alerts. The most preferred alert however, is the new visual alert of the iOS 5. This alert is in General settings’ Accessibility menu. Once the user activate the LED Flash for Alerts, the LED of the camera of the iPhone will glow when the user receive an email or message when the phone is in silent mode.

This shortcut is perfect for those who regularly think that their iPhone or iPad is nearing the storage capacity limits. All you need to do is go in to Settings>General>Usage, and begin a survey to look for the worst offenders. If you want detail information about a particular app, then you just need to click on that app.

Your iDevices now have the views of alternate routes, thanks to the iOS5. Once you are able to define where you are and where you want to go, you need to tap the routes. This shortcut is very helpful for frequent travelers.

The shortcuts on iOS 5 help the users to make AutoText corrections quite easily. The user needs access the Keyboard settings on the iDevices and after opening the Settings, just tap on the General. After doing that, the user need to find the keyboard and tap on it. At the bottom of the screen there is a section titled Shortcuts.

This is a useful shortcut for iPad. This shortcut allows the users to access different running apps simultaneously using their fingers. This application can be closed by pinching the fingers inwards.

Go to Settings and then access General, then choose international and use your fingers to Add New language. This shortcut allows the users to select several languages. You can also add different emoticons using this shortcut.