When companies like Samsung and HTC are battling it out in the Android arena, completely ignoring the casual user and the budget phone market, Sony Ericsson steps in and deals its low blow in the form of the CK13i txt. It is a QWERTY phone that is sure to take the budget QWERTY category by some hullabaloo. The Sony Ericsson txt comes with a 2.6” QVGA screen with a 320X240 resolution. The viewing angles are quite convenient and a scratchproof coating protects the screen. This means that you can forget daily wear and tear; the screen remains intact and clear. The QWERTY keypad is a joy to use with well-placed keys and is comfortable to touch. The fixed focus 3.2MP camera clicks decent quality pictures as well. Music playback, as always, is quite good. 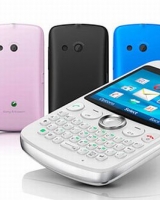 The Sony Ericsson txt comes equipped with a powerful 1000mAH battery that gives a standby up to 416 h, talk time of up to 3 h 12 min and music play of up to 23 h. The net connectivity is quite fast on EDGE and WiFi, so the webpages load smoothly. The call quality and signal reception are superb. The preloaded social networking apps are quite a treat and allow easy access at one click.

The Sony Ericsson txt supports Quad Band GSM/GPRS/EDGE connectivity. However, it lacks 3G, so you will have to rely solely on EDGE for near-fast net connectivity. The lack of 3G is compensated with Wi-Fi. The 3.2MP primary camera is fixed focus and records video in QCIF format at 15fps. The screen is a 2.55” QVGA with 320X240 resolution at 154ppi, which is more than enough to display the menus and web pages. Sony Ericsson tweaked its proprietary OS on the CK13i to suit the resolution and provide optimal clarity. The QWERTY keypad has well spaced keys which make hours of texting seem like minutes. The media player is quite good and bass and treble output is decent. The FM radio has RDS. The onboard memory is 120MB with 64MB of RAM and external memory supported is 32GB. The Friends App lists out the most contacted friends and integrates their Facebook, Twitter, emails, SMSs and Call records for easy access. Other apps like the Youtube app add functionality to the phone.

As with all QWERTY phones, the Sony Ericsson txt flaunts candybar form. The edges are stylishly curved to make it as ergonomic as possible. The phone comes in bright and vivid colors (it was launched in blue) to appeal to the younger generation. The phone has physical buttons for call, end and home. Sony Ericsson txt allows the option to assign shortcuts to applications on various keys. You will also get a 3.5mm jack at the top. The screen takes up exactly half of the front. Overall, the phone really looks cool. At 106 x 60 x 14.5 mm and weighing 95g, the phone is quite compact.

The Sony Ericsson txt mobile phone aims to offer a full QWERTY keyboard and preloaded social networking apps to appeal to the younger generation; however, the lack of 3G is inexcusable in today’s age. This CK13i is preloaded with social networking apps like Twitter and Facebook to keep you updated. A great inbuilt feature called the Friends app lets you select the top five of your most favorite contacts and streamlines Facebook, Twitter, email, SMS and call records making them more available. The Youtube app is also quite functional. Overall, it’s a great value for money phone.