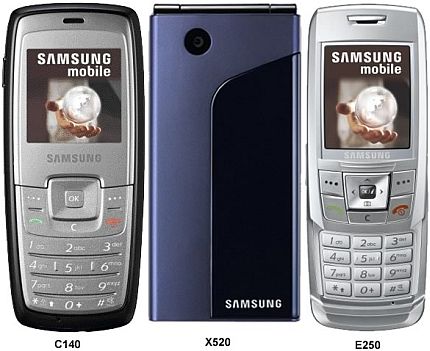 The SGH-C140: It’s an entry-level bar phone with stylish look. It has 65K color LCD display, speakerphone or hands-free communication and 16 polyphonic ring tones. It has a screen measuring 3.8cm with a resolution of 128×128 pixels. It comes with a camera with an internal memory of 700KB.

The SGH-X520: Samsung’s chic slim phone is coming in more fashionable colors, like Indigo Blue and Wine Red. It has 65K color CSTN LCD screen measuring 4.8cm with a resolution of 128×160 pixels. It features FM radio and a VGM camera with an internal memory of 2.8MB.

How many chocolates did the world munch...