These are days when a phone that behaves only as a phone is really hard to find. With cameras, recorders, music players, browsers and radios getting built into handsets, the level of complexity is constantly on the rise. Cutting through this clutter is a very basic phone from Samsung – the Guru E1081- which allows for the functions cellphones were originally intended for. So if your elderly aunts/uncles or your garndparents are looking out for a phone for utility, think Guru. The same would hold good is you want to present your driver or maid a phone to keep track of them. 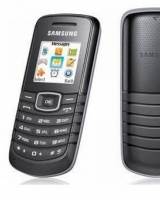 The performance of the Guru E1081 has to be based entirely on the quality of calls and battery life for the phone has nothing else to ‘speak’ about. The handset runs on proprietary Samsung software which is decent. It has been built to allow people to talk and the 800 mAH battery seems to do just that, providing 12 hours of talktime for every recharge. In the standby state, the battery has a capacity of 550 hours. The handset possesses only 1 MB or memory but given the fact that it can store up to a 1000 contacts and at least up to 500 smses, it should more than suffice an average user. That apart, the phone provides a list of the last 20 missed calls, received calls and dialed numbers.

What features could a phone costing less than Rs.1000 possibly have? It would even be unfair to expect any features. However, the handset does pack in some essentials that are helpful. It has an excellent built-in speaker which makes speaking easy without putting any kind of strain on the ears and hands. That apart, the phone has been pre-loaded with 40 polyphonic tunes to choose the ringtone from. It also hosts a calendar, a clock, an alarm, a currency converter, a stop watch, a calculator and a memo book – things that are practically useful in day to day life. Finally, a mobile tracker has been built into the phone as a useful security measure.

When it comes to the design, the Guru E1081 does not appear in the slightest bit like a cheap phone. It has neat and ergonomic buttons placed on a slip and easy-to-grip body. The buttons are large and easy to use. The CSTN screen is of a low resolution but of a comfortable viewing size. The back features slits to ensure better gripping while using the phone or while taking out the battery. Being only 1.4 centimeters thick and 3.6 centimeters in length, the phone easily slips into the pocket. Though the phone is very light, on the whole, it has been sturdily built and exudes a feel of solidity.

One cannot expect anything much from a phone that is available for a cost lesser than that of a calculator! For the price that is being charged, Samsung has done an amazing deal in developing the Guru E1081. The battery back up is simply marvelous and as long as one is looking to smsing and calling/ receiving calls from the phone, it is more than adequate. The fact that it is the cheapest GSM phone to arrive in the Indian markets should not be forgotten before one jumps into hasty conclusions.

Everything you need to know about Sony...