The Samsung Galaxy Y Duos S6102 is a smartphone aimed specifically towards the young at heart. The phone sets off any person’s smartphone quest until one ends up with a superphone like the Galaxy SII or the Galaxy Note. The Galaxy Y and the Galaxy Y Duos are both a way above their rivals from HTC and LG. The Android has been tweaked and repackaged into an exceptionally user-friendly form. The phone itself is so cheap that you don’t wonder why you bought it, rather, what you would have done if you had not. Be warned that the Galaxy Y Duos is not something that comes loaded to the teeth with space age technology. It is a simple and neat smartphone that has been priced reasonably. There is a full connectivity set and the pre-loaded apps are awesome. Samsung threw in quite a fast processor and Gingerbread 2.3.5 as two surprise revelations for making the Galaxy Y Duos a basic, yet, quite an updated smartphone. 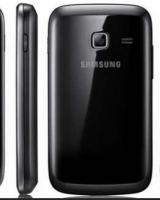 The phone has enough hardware to run Gingerbread like a horse on steroids. Internet connectivity is astoundingly fast and call quality and signal reception are good as well. Samsung ships the phone with some really useful pre-loaded apps that are arranged in the TouchWiz interface for user friendliness. Touch response is very good. The camera takes fairly good pictures but the images come up bland on the screen due to its low clarity. The Galaxy Y Duos’ 1200mAh Lithium-ion battery guarantees an 850h/540h stand-by (2G/3G) and 17h/6h (2G/3G) of talk time. The blessing of having the small, low-resolution screen is that it doesn’t hog the battery. The Galaxy Y Duos can easily last 48hours on continuous 3G and Wi-Fi connection.

The Galaxy Y Duos supports Quad Band GSM/EDGE/GPRS and Dual band 3G. It does not support HSUPA, but supports HSPDA at 7.2 Mbps. The screen is a 3” 256k color capacitive TFT. The touch response is astounding, but the 240X320 resolution is a bit of a letdown. The processor is faster than that of Galaxy Ace’s at 832Mhz (ARM v6). Samsung probably overclocked Galaxy Y’s processor to achieve the 2Mhz increase. The phone has 160MB of internal memory, 512 MB ROM and 384 MB RAM which ensures that Gingerbread soars around inside the phone. The external card slot supports up to 32GB and the phone ships with a 2GB microSD. The camera is a 3.15 fixed-focus variant that supports face and smile detection with image stabilization. The phone supports Dual SIM standby.

The Galaxy Y Duos has a clichéd and conservative design. The phone is made of high-grade plastic that makes it both light and durable. The back cover has been given a matte finish that makes it good for grip and prevents accidental slippage. The phone’s edges are tapered to provide it an ergonomic design. The Galaxy Y Duos is about the same size as the HTC Wildfire S, which is its main rival. The 3” screen takes up the entire front part of the phone. As always, Samsung earns no brownie points for its QVGA screen as viewing angles are poor and the screen lacks sufficient brightness and contrast.

Y stands for Youth and it aims at entry-level phones in the company’s recent nomenclature. The Galaxy Y Duos is way down at the Samsung smartphone android-based food chain. It is in the same league of the likes the Gio, Galaxy Mini and the Fit at the wide base of a smartphone pyramid that eventually ends at the Galaxy Note and SII (for now). The company is considering the entry-level smartphone market critically. The Galaxy Mini comes with a marginally better camera and slightly larger display. The Galaxy Fit touts a 5 MP camera and an even bigger screen. However, the Galaxy Y Duos does offer the updated Android Gingerbread and a faster 832 Mhz CPU.

Is i9 cell phone really worth buying?

How can I get back deleted market...