Arriving with a phone in the Indian scenario is a tough challenge. There is a bewildering array of phones from different brands with nearly similar pricing. Theoretically, it means that one has to arrive with a completely unique phone to cut across the clutter or keep releasing lots of phones and remain in the top of the mind of the consumer. Like most of its competitors, Samsung too seems to have adopted the latter strategy and added another member to its long lines of phones – the C3752. This is a dual-SIM, slider phone that has been built with most of the features that one could hope for. However, the lack of 3G connectivity might come as a disappointment for many. 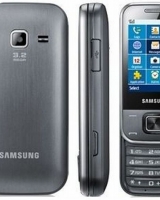 The phone provides the powerful advantage of being able to hold two SIM cards. This means that you can easily separate your personal calls from your official or business ones. This is vital in keeping work life and personal life separate. The same also ensures broader and better coverage from the overlap that is obtained if two different networks are being used. The call quality is good thanks to the good speaker and ear piece. The camera is decently good but it lacks autofocus. The slider moves easily and gently but the display is not quite up to the mark in terms of the resolution. The 11 hours of talktime that the phone provides speaks well for the battery.

This dual-SIM GSM phone features a QVGA TFT display that measures 2.4 inches with a 320 x 240 pixels display. Its in-built WAP browser has the ability to access Facebook, MySpace and Twitter via its pre-loaded support. Since its supports the dual standby mode, it can accept calls from both the SIM cards without having to swap between the lines – a great idea for conferencing! Samsung C3752 has a 3.2 MP camera which also supports video recording. It has capabilities to record from its own FM radio into an mp3 format and has an external antenna to assist better reception. The phone supports EDGE and GPRS along with Java games and animated wallpapers.

Slider phones always seem to have something cool about them. Its like they have something which is more than meets the eye! The looks of the phone is decent enough for the price at which you get it. The Samsung C3752 fits neatly into the hand. It is slightly bulky like all other slider phones but the buttons are comfortable and a delight to use. At 2.4 inches, the screen is a large one. The camera and speaker are both located on the back side.

The phone has been priced at around Rs. 4600. For that price, the phone has been elegantly designed with most of the features that one would look for. As it has all the multimedia features, it is definitely a value phone. It is best suited for those who wish to flash a trendy and smart feel.

How to get my Droid back to...

How to reset the sidekick slide phone?