Most of us are crazy about iPhone but not everyone of us can own one. In such a case, we often crave for a gadget that offers similar looks and functionalities and also suits our pockets. Most companies have one or two phones in their armory that look strikingly (I don’t mean a complete rip-off) similar to iPhone and offer comparable features. Samsung Galaxy Ace S5830 is one of those phones, which inherits its design from iPhone and will make you feel as if you are holding one in your hand (it might also do the trick of others believing it’s a iPhone in your hand). 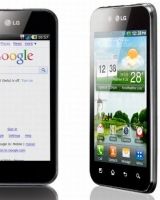 The 800MHz processor gives decent enough performance in most cases except a few exceptions such as swiping among one of the five Home screens or scrolling through the phonebook. Thanks to TouchWiz 3.0, your contacts are associated to your social-networking sites accounts. The call quality is good and you wouldn’t face any audibility or noise related issues with the phone. It comes with a Swype keyboard that tries to predict what you’re going to type and provides you messages with auto spacing and auto capitalization. You can adjust the speed and accuracy of this feature. Moreover, the messages are displayed as threads, which help to remind you where exactly did you begin.

Web browsing is not that comfortable on this phone attributing to its low-resolution screen and lack of Flash. Its camera helps it score some extra points considering the fact there are few phones offering a 5-megapixel camera at this price range. The camera with the Flash has a number of shot modes to choose from, which certainly improve the quality of images. The same records video displayed at 15fps, which is not much to talk about. The handset can boast of DNSe technology along with virtual 5.1-Stereo, which will tell the difference between the sound quality of this and other standard phones, in case you use good quality earphones/headphones. The battery doesn’t let you down and will survive the day even after heavy use.

Ace S5830 is based on Android 2.0 platform popularly known as ‘Froyo’ with Samsung’s own TouchWIZ UI layer running on the top of Android interface. It’s 3.5-inch capacitive touchscreen offers you an enough area to play with your multimedia or ‘kill’ time over the internet. What powers it underneath is a 800 MHz ARM 11 processor along with Adreno 200 GPU. You wouldn’t have any connectivity issues as it comes with 3G enabled with HSDPA capable of bandwidth up to 7.2 Mbps. Thanks to it being an Android phone with Wi-Fi, the device itself can be used as a Wi-Fi hotspot. It comes with Bluetooth 2.1 with A2DP and USB 2.0, so you shouldn’t have any problems while transferring data. The 5-megapixel camera comes with a LED flash and autofocus. The battery is standard Li-ion 1350mAh, which is also most often found in similar mid-range phones. In terms of memory, it comes with a 158MB internal memory along with a 2GB microSD.

As we said previously, Ace S5830 inherits its design from the revered iPhone. The 3.5-inch capacitive touchscreen covers most of the area of the 112.4 x 59.9 sized screen. The phone is sized just rightly and comfortable in your hand. It is certainly a light phone with the weight of 113g and fits easily in your pocket. The screen is covered by the Gorilla Glass, which would prevent it from breaking in case you drop it off on some auspicious occasion and the back side has a grippy surface to help you get better hold of it. It is slim but not skinny at 11.5mm giving it a more slick look. Somehow, Samsung decided to just offer 320 x 480 pixels on the 3.5-inch screen and it looks more like trade-off to help the phone last longer with its standard battery. You’ll hardly notice any physical buttons on the phone except the big square-shaped button below the screen (exactly like iPhone) that takes you to the Home screen, a power button on the right side that also works as the screen locker, a microSD slot and a volume rocker on the left side. At the top lies the 3.5mm jack and micro-USB charging socket with cover.

Samsung Galaxy Ace S5830 tries hard to accomplish its task and we beleive it succeeds to certain extent. The handset has its flaws and limitations, but is still a good buy at a mid-range price. It doesn’t offer you all and everything, but certainly excels in certain fronts. Given that its low-resolution screen and low-quality video recording is nothing to brag about, but if you can live with that, Galaxy Ace is a great phone to have.

How do I create the perfect Ed...