Anywhere we look, we find huge smartphones which perhaps lack the only capability to launch nuclear missiles (Apple may soon come up with an app to do that!). However, the casual mobile users are not yet extinct and for them, a phone still means making a call or sending a text. Some style thrown in appeases too. The Samsung C3530 combines both style and functionality in a budget that appeals to all strata of casual mobile users. The design of the phone is subtle and the media playback capabilities are great. It has a compact and burnished body that speaks both durability and grace. The phone also has support for up to 16GB of external storage, a 3.15MP camera and support for social networking via Facebook and Twitter apps. The striking amalgamation of classic design, superior features and enhanced usability make the C3530 a real winner. 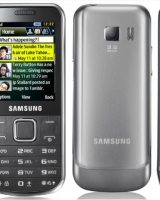 The Samsung C3530 touts its USP to be its great music player which is quite good to be honest. The player has physical music buttons and the DNSe sound enhancement which make it quite a great deal. The 3.5mm headphone jack will allow you to plug in your favorite headset but do not expect skull cracking basses. Video playback on a 2.2” screen is really not everybody’s cup of tea even though the C530 can play MP4 videos flawlessly. The camera has no flash but the 3.15MP takes decent pictures even in cloudy weather. The video recording feature is more of an excuse than an actual function though. Browsing the net is decent yet troublesome on the small screen. Words do not wrap properly and the heavier sites do not load due to insufficient memory. The 960mAh battery ensures Stand-by of Up to 640 hour and Talk time of Up to 14 hour 30 minutes.

The C530 is a feature packed handset which is somewhat of a surprise when compared to the price tag. It has every bang for buck and more. It supports social networking via preloaded apps like Facebook, Twitter, Orkut and the Palringo messenger. The phone supports Quad Band GSM/GPRS/EDGE connectivity but lacks 3G which is a letdown for sure. Net connectivity is fairly fast on EDGE and pages load decently well on the WAP2.0/HTML supported browser (Opera can be installed for faster net access). The 3.15MP fixed focus camera takes decent pictures and records video in QCIF at 15fps. The phone has a hot swappable external card slot which makes up for the 50MB onboard memory. Samsung ships the phone with a complimentary 1GB card and it supports up to 16GB. The music player is really awesome with its DNSe technology and supports all popular media formats. The phone also comes with a 3.5mm jack. The screen size is 2.2” which is more than enough.

The C530 has a rounded brush metal body. It is both traditional and contemporary. At 112.2 x 46.7 x 11.9 mm and weighing in at only 91.4 g, the phone is both thin and light. The metal finish of the back cover gives it an added appeal and makes it appear sturdy. A closer look reveals rough cuts on the metal which meddle with the overall aesthetics but not to the point of being crude. The keypad is spacious but wobbly. The phone’s brushed metal look is good yet we cannot compare it to the Samsung L700 or the Nokia 6300.

The C530 is no Android running behemoth. It has great call quality and signal reception and a great battery life, all attributes of a good phone. Yet, the recently launched Nokia C3 Touch and Type offers more features, like WiFi and 3G, at a slightly lower price. Even the screen is larger and the camera is 5MP. The C530 is a basic phone and has withstood the test of time as it is certainly more reliable. If you don’t mind the price tag, the Samsung C3530 will go all the way with you.

Are used unlocked cellphones good to use?