June 2010 release of the Symbian based, Nokia X5 projects it as a phone to fill the gap between the X3 and the X6. Supporting major IM and webmail services, the X5 boasts of maybe one among the best QWERTY keypads a phone could ever possess. Its unique designing has been to attract youngsters who cannot spend too much. The features built in like the ‘shake change’ of tracks are what the youth consider as cool. 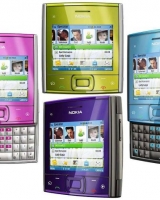 When it comes to performance as a phone, the X5 dazzles. The network reception and the phone call quality are both excellent and top-notch. It may take some time to get used to handling the phone but after that, it is simply sheer joy. The Wi-Fi also performs very well and picks up even the weakest of signals. It is a pity that the phone lacks a GPS.

The web browser of the X5, however, lacks the search bar and the ability to open multiple tabs. However, the browser is fast and supports basic flash playback also. And typing on the keypad is a pleasure to say the least! The battery works strong and lasts long for its tiny size. But it could be made better like the one in the Nokia E5.

Being the latest in music line of Nokia phones, the music quality is impeccable and perfect. A dedicated music key, high quality headphones and loud speakers make the phone a boon for music lovers. The performance of the camera on the still and video front is just about average.

The X5 handset comes with an Accelerometer sensor which means that images and videos auto-rotate with ease according to the orientation. One could also change tracks or browse through unread messages by simply shaking the phone! All the essential communication features like SMS, MMS, Push mail and email arrive built in along with a voice memo and speaker phone. The 5 MP camera is the fixed focus type and it arrives with an LED flash. A dedicated media key along with Internet radio connectivity with ease means that music buffs can have a good time. Many apps are built into the phone. These include an MP4/H.264/H.263 player, an MP3/WMA/WAV/eAAC+ player, a neat organizer, a Document viewer for Microsoft Word, PowerPoint, Excel and PDF and a voice memo. There is a quick toggle to move between the Business and Personal home screen.

The phone has been designed with a comfortable-to-use QWERTY keyboard which slides out smoothly from under the 2.3 inch TFT screen. Though the keys on the top of the phone are spaced well, the central navigation pad can get confusing to the user at times. The phone has an overall square shape when it’s keypad is not in use. Three keys sit on either side of the central 5-way navigation key. The top features a 3.5mm headset jack along with the micro USB connector/charger while the bottom holds the speaker. A front-facing camera is conspicuous by its absence!

The phone has unique colors, a unique design and special features. Uniqueness and general taste do not go together and so the phone may not get universally popular. For a college-going student, however, the X5 promises many features at an inexpensive price. The problem arrives from the fact that the Nokia E5, with its much better features, larger battery and GPS abilities, is available for just Rs. 1000 more. So, how could the X5 be recommended when you could obtain a better deal.

Can anyone assist me for IPhone 3G...

Top concept phones that are way beyond...