The Nokia Lumia 610 looks fantastic in its sleek design and metallic looks. The phone has many applications which can help and assist you in your daily life and can also give you fun on move. These apps include Nokia drive, Nokia maps, Nokia transport and Nokia music. People hub is one place for all your contacts at twitter, linked-in and Facebook. You can therefore reach the contacts with ease and can also create groups of your own. The phone makes fast internet browsing possible with the help of its internet explorer 9. The device comes in many colors and you can choose the one which suits your tastes and moods. 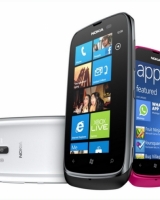 The phone has a 800MHz processor. Certain applications do not run because of the phone’s limited memory. Those background processes which use more than 90 MB of RAM are also disable automatically.

The 5 megapixel camera on the phone is auto-focus and has an LED flash. It gives satisfactory photographs which can have up-to 2592 x 1944 resolution. Other camera features are face detection and geo-tagging. There is no secondary camera for video calling but the phone records decent videos without any hitch with its primary 5mp at [email protected]

The phone has a stand-by time of 670 hours in 2G network and 720 hours in 3G network. It can give a talk time of 10 hours 30 minutes in 2G and 9 hours 30 minutes in 3G network. In real world usage terms this means a usage duration of 4 to 5 hours (which depends on the surfing time and the amount of screen brightness as well). The 1300 mAh battery gives decent operational life to the phone.

The built in Microsoft app can be very beneficial for the students. It has Word, PowerPoint and Excel for mobile which can help in better management of documents. One note mobile can help in capturing ideas, voice memos, notes and pictures which can be worked upon while on move. The notes and files can also be synchronized with the help of SkyDrive. The opening and editing can be done on the phone or PC.

The Nokia Lumia 610 runs on the windows platform. The phone has Windows Mango OS version 7.5. Nokia and Microsoft have worked together to lower the system requirements of the phone and therefore the phone has a single core 800Mhz qualcomm snapdragon S1 processor. The internal memory has a 8 GB storage. The phone has a light and proximity sensor. The various messaging options include MMS, SMS(threaded view), instant messaging, email and push email. The phone has the internet explorer nine which provides for faster email browsing. You can tune in to the stereo FM radio(with RDS) and can store the music in the internal memory of the phone as well. The phone has GPS with A-GPS support but no support for java. The real budget phone is available in a number of colors including black, magenta, cyan and white. The dimensions of the phone are 119 x 62 x12mm which provides for comfortable gripping. The phone seems a bit heavy with weight around 131.5 gm.

The phone gives a fresh and colorful appearance and is targeted at the younger population. The phone’s body is made with plastic(with some metallic edges). The handset has colored glossy plastic at the sides which give a very appealing look to the phone. The design of Nokia Lumia 610 helps to introduce the Windows phone to a young population of users. The size of the TFT capacitive touchscreen is 3.7 inch and has a resolution of 480 x 800 pixels. It has 16M colors and a 252 ppi pixel density. The multi-touch screen has cornering gorilla glass protection which makes the screen resistant to scratch.

If you want a Nokia phone running on windows operating system and can cannot get the latest and greatest like the Nokia Lumia 800 and Nokia Lumia 900, then the lower end Nokia Lumia 610 can fit you budget. Though the device does not have many features in comparison to its more pricier counterparts have, it does gives a satisfactory performance in low budget range. Nokia has recently announced the NFC version of Lumia 610 which increases the functionality of the phone.

Everything you need to know about the...