The E7 is the latest global GSM phone from Nokia that is message-centric and business-centric with its landscape QWERTY keypad. Nokia has been the global leader in QWERTY-laden keypad phones since the introduction of the first such model in 1996. Fifteen years from that beginning, we seem to have a worthy heir for the physical keyboard phones in the anodized-aluminium chassis bearing Nokia E7. The E7 has retained most of the design cues and features of the successful Nokia N8 but in the design and looks of the keyboard, it has been made differently. 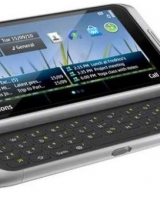 The E7’s performance as a phone is excellent – crystal clear and rich audio with no hollowness or echoing that seems to plague many smartphones. The loud volume ensures that it is heard even in noisy environments. Its Bluetooth functionality and pairing is beyond question and has a pretty decent battery life – 5 hours of talk time with 20 days of standby time. This means that a moderate usage will need you to charge the phone only once in 36 hours. The 680MHz ARM11 processor with the 256 MB RAM makes the performance sluggish when it comes to loading some apps. The phone also freezes a while when playing videos.

It may seem like old wine in a new bottle as the Nokia N8 takes a new avatar as the Nokia E7. The internal configuration has been left unchanged. Thus 680MHz ARM 11 CPU, 256MB of RAM, a Broadcom BCM2727 GPU, 16 GB internal mass storage with 350 MB phone storage come along with it. A complete set of radios have been built into it with support for GSM / EDGE (quadband), UMTS / HSPA (pentaband, including AWS), Bluetooth 3.0, WiFi b/g/n, AGPS and an FM receiver. The internal mass storage replaced the MicroSD card slot. Similarly, the 2mm charging port and FM transmitter have been chopped away in a bid to modernize the phone. The phone has the ability to host a range of USB devices and optional accessories ( Nokia’s digital radio headset for instance). It makes use of Nokia’s Symbian OS.

The phone is heavy but sleekly designed with anodized aluminium. A landscape keyboard has been added for ease of typing and the overall casing has been made rugged, strong and durable. The feel is smooth and elegant and the phone comes in different colors ranging from flashy orange to dignified silver. The 8 MP camera that comes along is a great addition. It could have been greater had it been equipped with auto-focus.

The phone has been excellently built with high-quality and useful features. However, the Symbian OS that is about to be outdated makes it unattractive for the modern buyer. Again, as devices are getting smaller and more compact, the large size of the handset could be a potential put-off. That being said, the E7 definitely stuns in its looks and features. The large screen and QWERTY pad make texting and video viewing a pleasure. The slow software however, defeats these very advantages by making videos slow to load. Its expensive price tag only makes matters worse for it. Just like the OS that it hosts, the E7, sadly, may be on its way out even before it got in!

Which is the better option, Boost mobile...

how to get off from unlocked gsm...