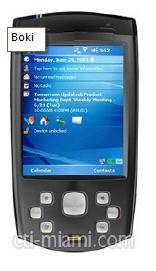 My crystal ball (i.e. industry insiders) tells me that HTC is in the process of prepping up some new phones. Of the lot, the best one without any shadow of doubt has got to be the Sedna P6550. Yes, another queer name from HTC; but what else were you expecting anyways.

This is a PDA with looks so typical of phones in its category. When I first ran through the features of the phone, I was dumbfounded. This phone incorporates almost all the features under the sun that you could ever load in a PDA. Still don’t believe me? How about a credit card reader for one? Yep, you heard it right, I aint talikn about a MMC reader but a credit card reader (although that one is an add-on.)

For additional connectivity, it includes Bluetooth and Wireless LAN 802.11 b/g. With its in-built GPS, you can rest assured that you would never get lost. It has a 1600 mAh and miniUSB, USB 1.1 and 2 SDIO/MMC slots for your memory expansion. As already mentioned, the phone will feature a credit card reader as an add-on, there’s also a minor feature to extend phone battery (minor huh!). Crystal ball is getting really hazy, all it can show is late ’07 or early ’08 as the possible release date.

Get Geared for Impeccable Selfies with Samsung’s...

Sweden, Germany and UK will be the...

Cellphones double up as musical instruments

Verizon Slashes Smartphone Pricing to $99 on...