Home Off Beat How many chocolates did the world munch through?
Off Beat

How many chocolates did the world munch through? 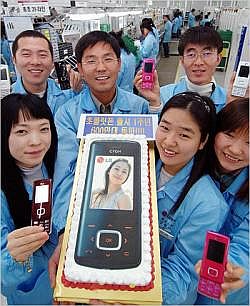 LG has come up a long way with its Chocolate phones within a year of its launch. While real chocolate might be bad for your health but 6 millions LG Chocolate phones have been consumed worldwide in the year 2006. And the thrilling thing is that 3 million units were sold in the last two and a half months only.

The company officials predict that the sales will cross 10 million in the Q1 of 2007. LG must be smiling a lot at its new LG shine that also showed record-breaking sales. Great going LG!

How many chocolates did the world munch through? was last modified: May 22nd, 2013 by Community Writer | Community.Drprem.com

Windows Mobile phone: A must for high...

Woman Fired From The Job Via An...

CSR to develop an AIO Bluetooth +...

Nokia Strapup: Phone or a bracelet?