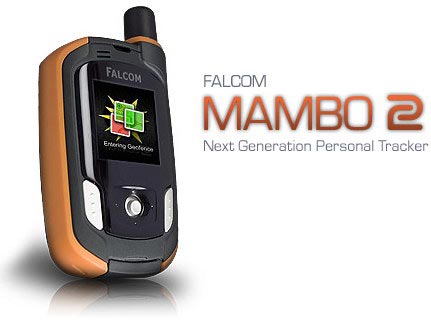 Even though the new Mambo II looks just another cell phone (even archaic in design one might say), it is quite the opposite. Indeed, Falcom has taken the cell phone technology to a whole new level with this phone. Equipped with Bluetooth, GPS antenna, and a 3D motion detector, this phone is arguably the coolest gadget in the market.

This new baby is packed with lots of goodies. First off, it’s equipped with a personal tracker system. The phone has a quad band II GPRS/ GSM inbuilt in it. This should fulfill your tracking needs. The tracking device receives signals from four satellites. I think this is the best feature of this phone.

Second, the extension on this phone contains the GPS antenna . It has a powerful Helix antenna. The GPS has a whopping 20 channel receiver. The micro GPS chip is a SiRF Star III GPS chip, which is extremely powerful. The trace4You website helps you the track it in real time.

Third, with the USB and bluetooth technology in place, this phone hooks up to your PC or PDA and even lets you track on that system. The mini USB helps the phone recharge! Also, it can transmit. I think this is probably the most unique feature of this phone. I have never heard of a phone that recharges with a mini USB.

Fourth, the 1300mAH Lithium Ion battery is pretty powerful. Coupled with the mini USB system, this battery charges in virtually no time!Pricing and release/availability information is unavailable as yet.

Hopefully in the coming months, the company will be releasing the pricing information. Till then, let me just say that Falcom has definitely unveiled the latest in cell phone technology – Mambo II.

A lot of Chocolate Redolence but, nothing...