Nokia Lumia 800 is the first Windows powered phone of the Finnish cell phone giant. Samsung Galaxy Note with its large display is a smartphone and tablet hybrid. Although both Nokia Lumia 800 and Samsung Galaxy Note are champions in their respective segments, however, when pitted against each other, we would like to see which of the two devices has the better specs to win the hearts of smartphone enthusiasts. 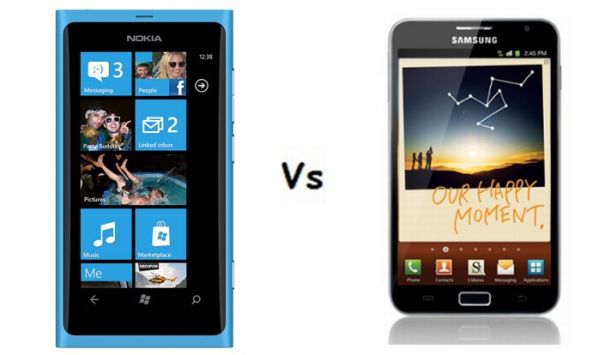 Samsung Galaxy Note: Equipped with the Android 2.3 Gingerbread software, Samsung Galaxy Note offers faster and smoother multi-tasking and internet surfing. The productivity of the touchscreen display is significantly enhanced with the upgraded Samsung TouchWiz 4.0 user interface. The customizable home screen could be personalized with widgets and apps. Samsung’s Hub and Android Market are sources of millions of apps for the device.

Winner: With hardly any difference between the software of the two devices, there is a tie in this segment.

Winner: With a larger and better display, Samsung Galaxy Note wins this round.

Samsung Galaxy Note: The Samsung device comes with a 146.9mm long, 83mm wide and 9.7mm thin body that weighs 178g. The durability of the device is accentuated with the Gorilla Glass display and a tough plastic casing.

Winner: The smaller and lighter Nokia Lumia 800 wins this round.

Nokia Lumia 800: The single core 1.4GHz CPU paired with Adreno 205 GPU gives the Nokia smartphone the power to run demanding applications, games and other power hungry tasks. The 512MB RAM ensures that the device does not slow down while working with multiple apps.

Samsung Galaxy Note: The robust performance of Galaxy Note is managed by a dual-core ARM Cortex A9 processor clocked at 1.4GHz and Mali-400MP GPU. Users will enjoy the benefits of the dual core processor including lower batter consumption and better responsiveness. The 1GB RAM, a standard feature of high-end Android devices, boasts of the ability to multi-task with multiple apps.

Winner: With a more powerful CPU and more RAM, Samsung Galaxy Note is the winner in this category.

Nokia Lumia 800: Equipped with Carl Zeiss lens, the 8MP camera of Nokia Lumia 800 displays impressive imagery skills. It features auto focus and dual LED flash for capturing even the minutest details of framed scenes. The built-in GPS receiver aids geo tagging. The special moments in the lives of Lumia 800 users could be preserved in 720p HD videos. However, activating the camera is an issue that Nokia needs to address. Shutterbugs might also face problems in focusing the camera lens on the chosen subject.

Samsung Galaxy Note: The 8MP rear-facing camera of Galaxy Note is capable of arousing the envy of its competitors. Along with the standard high-end smartphone camera attributes such as auto focus, LED flash and geo tagging, it offers additional features that are usually present in the standalone digital camera of reputed brands. The touch focus helps users to fix the camera focus on the subject simply by touching the relevant area of the touchscreen phone display. The built-in image stabilizer minimizes image blurring owing to camera jerks. Face and smile detection are other key imagery tools of Samsung Galaxy Note’s primary camera. The integrated video recorder could capture 1080p full HD videos. Video calling is assisted by the front-facing 2MP camera.

Nokia Lumia 800 is a great product, capable of earning substantial revenue for Nokia. However, when compared with Samsung Galaxy Note, it lacks the prowess to beat this superb Android device.

iCEphone – Designed to protect and save life

Why the functioning is same in all touch Nokia phones models?