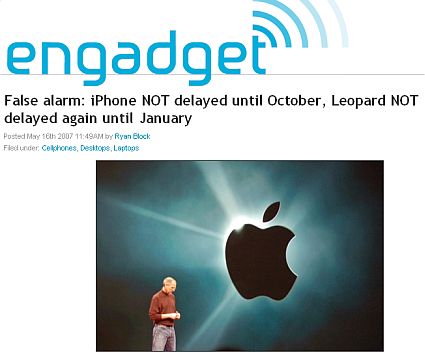 We know very well the weight of every word coming out of Apple’s abode and the every word coming out of the all-the-rage gadget blog ‘Engadget.’ Startlingly, an incorrect blog post by Engadget related to the delay of iPhone made Apple stock to fall 2.2 percent as investors hurried to sell their shares. The post on Engadget said that the iPhone, which was scheduled for a June launch, had been delayed until October.

As it turns out, the internal memo Apple employees received was actually retracted by Apple shortly after it was sent out. (Also published after the break.) We received confirmation from Apple PR that this initial email sent out to Apple employees was incorrect, and they let us know that the iPhone and Leopard are both still on track, and should meet their expected launch timeframes.

Presumably Apple is now on the hunt for whomever was able to spoof its internal email system.

Comments poured like anything on the post where a majority of readers expressed their anger on the blog. Anyhow, it’s still a mystery that how this story got started. But, Apple had to pay for the mistake heavily.