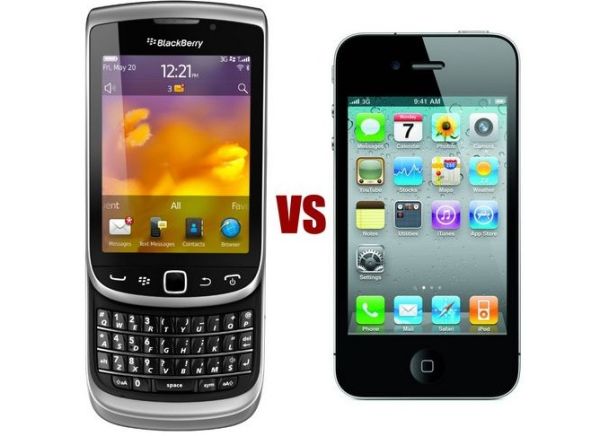 While Apple has been ruling the gadgets market with its multiple technological advancements, BlackBerry has not tried to stay back in any way. Craving an equal niche for themselves in the market, they have given a different edge to the way the world looks at things. Staying connected with each other was never easier, thanks to the multitude of products and gadgets they have provided to us. With innovation driving the name and technology ruling the mane, the utility of these global products is what makes them all the more desirable. Right from high definition cameras to music players, these gadgets have become all the more ergonomic and faithful to their users.

The article will deal with the quick comparison between the latest gadgets entering the market, Apple 4S and Blackberry 9810. As both the phones have a strong background, it is amongst the users to decide which features appeal to them the most.

Sophistication takes another leap when it comes to touch screen phones. The iPhone 4s measures 115.2*58.6*9.3 mm as compared to its BB counterpart, which measures around 111*62*14.6 mm. The screen of the iPhone incorporates a fantastic happening LED backlit IPS TFT screen while the BB has been fitted with a TFT capacitative touch screen.

While the iPhone boasts of a high-resolution 640*960 pixels screen, it has been deemed the handset with the highest resolution mobile screen. Built with a plethora of high-resolution text, images, and graphics, the iPhone appears to be a clear winner. The only place where it lacks in utility is that it does not have a QWERTY keyboard like its BB counterpart.

The iPhone beats it all when it comes to terms of operating system. The iPhone has beaten its BB competitor with a dual core-processing unit as compared to the single core unit of the latter.

When it comes to matching a price with the utility of the phones, the deciding factor is often the value for money the gadget provides. Right from the numerous features to the quality of the technology used, everything plays an important role. While the BB 9810 is available for a price of around ` 27,990, the price of the iPhone 4S is ` 32690.

Irrespective of how much value or price the gadget may be at, the admiration and excellence the iPhone exudes can never be matched by any other gadget. If you are the proud owner of an iPhone as well, then you can be rest assured, you have a winner on your hands already.

The BB 9810 has been equipped with a 5.0 MP camera which offers continuous auto focus, LED flash, geo tagging, image stabilization, face detection, 4x digital zoom for those far away sights and HD video recording at 720p. With such features included within it, the phone has proved to be a tough challenge for the Apple contender.

The iPhone pretty much offers the same features, apart from the 8MP camera. The user shall be awarded with exceptional 1.3 MP VGA camera, which has been fitted in the front. Use this front camera for Facetime or Skype and you would be rearing to go.

In a boxing match, as each opponent wins a round, the confidence of the winner tends to increase. In the clear fight between the iPhone and Blackberry’s latest optimized device, the winner emerging is the iPhone 4S.

With a thickness of just 9 mm, a high resolution screen of 960*640, a 8MP camera and just about everything one can want in their hand gadget, the iPhone has everything in it. While the BB model does come close to being a good competitor, it cannot match up to the authenticity and value the Apple creation has to offer to its audiences.

If you feel that you need a phone that suits your preference in terms of almost everything, then iPhone is tailor made for you. Right from the thickness of the phone to the operating system, everything spells out winner in bold letters to you.

Be assured, when you are a part of the Apple family, you can expect quality to match the price, and of course, with sustainability riding high, everyone would have only praises to Shower. While Blackberry has not been left much behind in the rat race, it has been defeated only by the slightest drawbacks. The phones duel in good spirit and shall prove to be the benefactor for all those who like a quick challenge.

How to get android phone from T-mobile prepaid?