You know you have a Blackberry when the phone sits sleek and comfy in your hand and exudes an aura of no nonsense professionalism. The Curve 9360 is the new phone from Blackberry, which is confident enough of its capabilities and is designed to take up any challenge head on. The Curve 9360 was blessed enough to have the Torch and the Bold flagship launched before it, thereby taking off expectations from its compact head. Now all it has to do is give businessmen and heavy texters the best possible service. Blackberry reassures that the 9360 will be the best Curve experience till date. Armed with a sturdy processor, Blackberry OS 7.0 and NFC support, the 9360 is a winner in its no right making the act, of upgrading from a Bold to a Curve, sound no longer blasphemous. 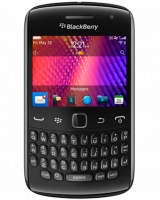 The Curve 9360 is powered by the new Blackberry OS 7.0. It also employs the upgraded Liquid Graphics UI that gives a fluid feel to the menu transitions. The hardware provided is more than enough to run the OS smoothly, but an occasional stutter is noticed. The icon set is simply gorgeous and the UI elements are uber cool. The OS 7 was designed keeping touchscreen phones in mind but performs considerably well even with the optical track-pad. One of the major improvements is the upgraded web browser that has a nice compact interface and connects to the net in a jiffy. There is no Flash support in the OS which means that sites that are Flash oriented will not be accessible. The screen, though vibrant, is inherently small and even the excellent track-pad cannot replace the versatility of a touchscreen. Thus, net browsing, though suited for normal usage, is not fun. It’s like looking at the through a pin hole camera.

The Curve supports Quad Band GSM/GPRS/EDGE and Tri band 3G. HSUPA was a bit slow at only 2Mbps but HSPDA was standard at 7.2Mbps. The display is a charm. At 2.5”, the screen is a TFT landscape display supporting 16M colors and a HVGA+ resolution of 480X360 with a whopping pixel density of 246 ppi. The full QWERTY keyboard is the proprietary Blackberry design and you can expect the same level of comfort and ease of use. The phone also comes with an optical track pad that makes navigation seem like a breeze. The processor of the Curve 9360 clocks at 800MHz, which is more than enough to run the Blackberry OS 7.0, in fact the OS roars with the processing power. The phone also has 512 MB of ROM and RAM. Standard Wi Fi b/g/n connectivity is also present. The AGPS is great and takes an update within a minute or two. One of the USPs of the phone is the NFC support which is new in the Curve series. The camera has been upgraded from the standard 2/3 MP to 5MP. The camera is still fixed focus and with VGA video recording, but is still a substantial upgrade.

The phone looks like a Blackberry. Yes folks, you won’t even have to look at the BB logo to ascertain that it is. The telltale QWERTY keyboard and the sleek looks attest to its Blackberry-ness. At first impression it can even pass for a Bold. The Curve 9360 has an all plastic body but the build is quite sturdy and durable enough to take minor accidental falls. The design is to the point and precise. The battery cover was, however, too glossy for comfort and attracts fingerprints like bees to a honey pot. Blackberry could have gone for a rubbery finish for a more complete look. Otherwise, the phone is quite ergonomic. The screen takes up 55 percent of the front and is a 2.5” TFT display with an HVGA+ resolution of 480X360. This has been a major upgrade from the normal QVGA screens of the Curve lineup. The high pixel density ensures wide viewing angles and decent legibility even in bright sunlight.

The Curve 9360 is impressively slim and comfortably compact and is a hardworking handset that delivers when you most need it to. The newly upgraded skill set makes it a must upgrade for Curve users. Even Bold 9780 or 9700 users can give it a try if their phones have aged and they want to give a wide berth to touchscreens. The phone is armed to the teeth and had the processor been a bit faster it could have very well given the flagship phone a run for its money.

iCEphone – Designed to protect and save...

Where can I buy Moxi digital video...