The BlackBerry Bold 9790 looks smaller than the previous 9900, has the best BlackBerry camera until date and is powered by a different processor, but has the same combo of QWERTY keypad and touch screen. Regardless of the difference or similarities, 9790 looks good and the best part is it costs less. It looks promising and has the ability to win the hearts of business users as well as heavy texters because users can have the comfort of both QWERTY keypad and capacitive touch screen. 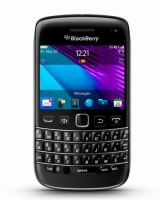 The processor works fine for most of the tasks, but if a heavy application such as app update is running in the background, it slows down the mobile. Keyboard is responsive; in fact, it offers the best typing experience than any other handset currently in the market. Camera is very good; its LED flash performs well, even in low lights. However, some of the tunings are not present including contrast control that you might see on any Android handset. Videos captured from the camera also look crisp and smooth.

With Bold 9790, RIM has tried to combine the best of both worlds, 2.4-inch 480 x 360 touch screen interface and a top class keypad. In addition, there is an optical track pad which is little sensitive, but once you get used to it, it becomes a great way to scroll through a long list of emails or choose menu options. The handset has a single core 1GHz processor, 5MP snapper with flash, GPS, Wi-Fi, NFC, HSPA, 8 GB onboard memory and 768MB RAM. Apart from that, it supports expandable memory up to 16 GB. From the camera, you can record videos with a resolution of 640×480 pixels. To zoom in and out, you can use the track pad.

Looking at its design, it looks like there was a competition within RIM to see who could make the most practical BlackBerry of all time and the winner designed this smartphone. Dimensions of the handset are 110mm x 60mm x 11.4mm. We have four buttons below the screen; all are completely separate from each other and surrounds the track pad. On the sides, there are nothing interesting except a headphone jack on the left and convenience key on the right. Lock button is on the top while synchronizing and micro USB charging port are down below. There is a hint of silver chrome around the sides and the rear panel is made of matte rubber. Frankly speaking, you will require a degree from MIT and power of Hercules to pull off the rear panel, until you figure out that it slides down. Anyways, the rear feels tough, solid and houses the camera and flash. The handset is light and remarkably thin, so you will not face any difficulty while carrying or using it.

The keypad is one of the best out there. It is not too hard or too soft. Even a person who is not accustomed of using a BlackBerry will find comfortable and convenient typing on it.

BlackBerry Bold 9790 is recommend for emailers, prolific texters and if you are a BBM fan, then look nowhere else. It hits the right chords in terms of price, performance and features. There are some tweaks in the mobile, but that can be easily ignored by looking on its lovely screen, superb keyboard and great battery life. Decent camera and excellent track pad are other additions. However, there are few odd negatives in its design and its operating system really needs an update. In addition, people with big hands may face difficulty while using it.

How and where can I get good...

Top 5 most exciting 3D cellphones of...