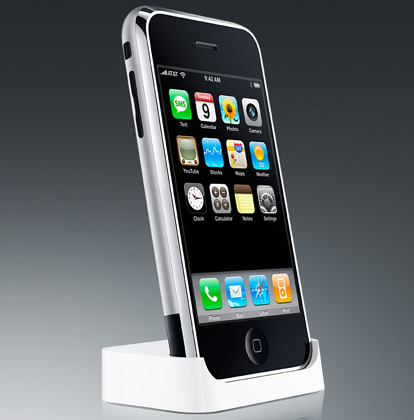 In the run-up to the official launch of the iPhone, rumors are running amuck. And honestly, we’re having a hell of a good time fuelling and/or quashing these rumors. (More often fuelling.) Well, the latest one to hit the iPhone-crazy genre of geeks concerns iPhone accessories, in particular its Bluetooth headphones.

The headphones that come along with the iPhones have to be charged just like the phone. The latest update on this is that Apple’s new Bluetooth headset will be chargeable via the iPhone docking station.

Proof is this picture, which hit the web yesterday. When the company released the previous picture, people were not sure about the purpose of the grooved hole. I guess your guess is as good as mine. But, the secret has been revealed by various sources. This particular hole lets the users pass cables so that they can recharge their headset.

Everything about iPhone is cool and if this one turns out to be true then iPhone will once again ace. We won’t have to deal with those stupid extra wires and we all like it, don’t we?

June iPhone frenzy positions it in the...

X-ray On Your Cell Phones

Lenovo i807 Blushes In Pink!