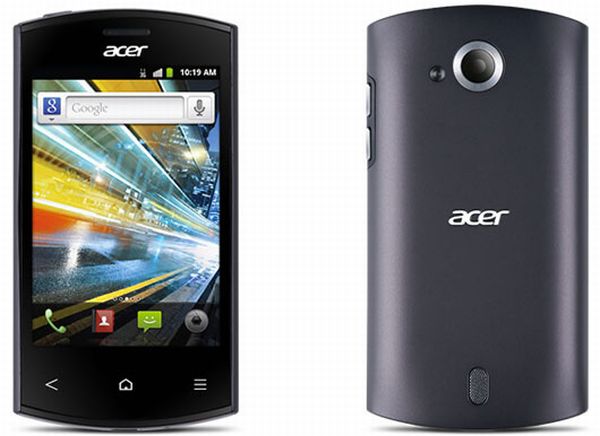 Acer recently unveiled its first NFC phone named the Acer Liquid Express. This mid-range phone runs Android OS Gingerbread and is powered by an 800MHz Qualcomm 7227 processor. The phone boasts of 3.5 inch screen and features a 5 megapixel camera in the rear. This phone is loaded with thousands of applications and can be used for multiple purposes including payment, cultural information, etc. Acer is confident that the Liquid Express will find many takers because it features advanced contact less technology. The Acer Liquid Express has got NFC Forum 2 and Cityzi certifications. This sleek and stylish phone is available in three colors including Titanium, Dark Burgundy and Pearl White.

The Liquid Express is Acer’s first NFC phone and it allows the users to pay, share and travel conveniently. This mobile with high-end user interface offers made-to-order entertainment. It is loaded with all social networking features. The design of this stylish phone is perfect for someone with mobile lifestyle. This device runs Android 2.3 Gingerbread and has got a large 3.5-inch screen with excellent picture quality. The Liquid Express is available in Dark Burgundy, Pearl White, and Titanium colors.

The Liquid Express is Acer’s first Smartphone in this category and it certain that this device will have to face stiff competition because nearly all major handset makers have already released their smartphones in this category.

The Liquid Express is Acer’s first smartphone using near field communications (NFC) technology and the contact less payments know-how. Sporting a 3.5-inch screen, this smartphone with a beautiful design is powered by an 800MHz Qualcomm 7227 processor. This phone features a 5MP camera on the rear side and it runs Android 2.3 Gingerbread. Acer has announced that it will soon release some other smartphones using the NFC technology, pledging that all its forthcoming Android-run smartphones will use the NFC in a better manner.

It may be recalled that the Google Nexus S was the first phone using the NFC technology and the release of Nexus S in 2010 has prompted all handset markets to come up with their NFC technology using devices. Acer however, did not join the bandwagon at that time and it is a late entrant to this segment. Acer is however, confident that the Liquid Express is “a technology of the future” and it will find its place in the market.

The Liquid handsets by Acer have failed to impress much but Acer is confident that the Liquid Express will be liked by the customers because it offers NFC connectivity. Acer has announced that it will use the NFC technology in all its forthcoming smartphones, adding that NFC support will be present in all android-run smartphones manufactured by the company in future. The Liquid Express has got a 3.5 inch display and it is powered by an 800MHz processor.

It features a 5MP shooter in the rear, but it lacks a front facing camera. The package includes a 2GB microSD card and the battery life is 6hrs 40mins. The hardware of this new handset is not very different from the other Liquid handsets released by Acer. Acer is marketing the new handset as the technology of the future. Going by the technical specifications we can say that mid-range handset is likely to find a place in the rapidly expanding smartphone market.

Further readings or Word around the web

As a technology of the future, NFC is a priority for Acer as it can be used for multiple purposes: payment, transport, tickets, loyalty cards, cultural information… and that’s without having explored the thousands more applications that will follow.

Even if contact less technology has only just started spreading across the UK, it is important for the customer to take into account future need when choosing a new model. In a few months’ time quite a number of smartphone users, whose new smartphones don’t include NFC functionality, will have to change their mobile in order to benefit from this new technology.’

How can I watch YouTube videos on my window mobile 5 pda phone?