The Sony Ericsson Xperia Neo V is an innovative phone available at a cut down price. Surely, the hi-tech features, which it offers at a reasonable price, make it a hot buy. Although, it is an extension of the Sony Ericsson Neo that was unveiled last year, the price of the new version has been reduced vis-à-vis its former counterpart. This phone will definitely be at clash in the market with Spice and Motorola. The phone has specifically been introduced with the aim of making hi-end applications available at a lower cost. It has a lucid display screen, amazing sound quality, music notes that you will love jamming to, social network connections, web browsing and even Internet messenger. 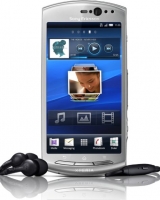 The powerful 1500 mAh Li-Po battery doesn’t let the phone run dry quickly. It won’t die out for a whole 24 hours even if you use all standard functions like voice calling, watching videos, surfing web and also using the different applications fitted on the mobile. The signal strength is strong and it reaches most of the time even when you take the underground subway. The voice quality of calls is crystal clear and the notes from audio players are also pure, whether you use the loudspeaker or the headphone. The FM radio is also quite fine and operating it is a cinch. The xLOUD option that can pump up the volume further is an excellent touch.

Stylized with a “human curvature” design, the phone is available in three different colors: silver, white and blue with gradient variations. The LCD TFT display screen with a resolution of 480 x 854 pixels measures 3.7 inches and is driven by the Mobile Bravia Engine. Android Gingerbread 2.3.4 has been pre-installed on it and runs using the 1 GHz Snapdragon MSM8255 processor. Those who like to stay wired will like the Google Talk and Facebook Inside deployed on the device. There are two cameras provided on the handset. The 5-Megapixel AF camera supports 720p HD video recording. While, the camera slotted in the front is designed with video calling in mind and has an HDMI output.

The elongated phone has arc shaped edges. With its hefty chassis, it dares to be different in a market that is thronged with slim handsets. The phone weighing 126 grams has a showy 3.7-inch LED backlit display. The sizable album art scenes and background color that changes with them make its music player look rather fashionable. The design and layout of the phone is quite convenient. On the left side, it holds the buttons for power, volume, lock-unlock and camera. The micro USB port, mini HDMI and 3.5mm handsfree socket are slotted on top of the mobile. The earpiece and VGA front facing camera are embedded on the front right above the screen. Take note that this model does not have the slide out QWERTY keyboard.

The Ice Cream Sandwich upgrade is quite promising, which might help the phone bypass the Andriod league. The Samsung Galaxy S and Google Nexus S would have been a competition if they had not released earlier in the market. Hence, this phone being a novice, will attract a lot of attention. Also, if you can extend your budget a bit, you can buy the Samsung Galaxy R or LG Optimus 2X. Nevertheless, Sony Ericsson Xperia Neo V is quite a buy at its markup price.

How to Send Text Message To Cell...