Touted as the world’s first ‘pure-touch- smartphone’, the Nokia N9 gives users the ability to operate it without using any buttons! The Nokia N9 is powered by the MeeGo platform. The whole experience of the Nokia N9 is built around the Swipe feature. So, with a single gesture, users can operate the phone and with the neat configurations on the phone, the Nokia N9 is surely not one to be forgotten! The Nokia N9 is priced around Rs. 30,000 and features AMOLED screen to provide crystal clear view.

The MeeGo OS was supposed to be another of Nokia’s OS used in its phones, but Nokia chose to abandon the OS later on and go for the Windows Platform instead. Nevertheless, Nokia has given a chance to the MeeGo platform with the Nokia N9 and has come pretty good at it. 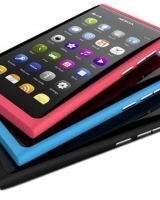 The MeeGo platform provides a very comfortable user experience on the N9. The usage is pretty fluid and the various effects like the checkerboard effects are a treat to the eyes. The processor and RAM power makes sure that the N9 never hangs. Playing games is a very pleasing experience too, thanks to the great processor power. You can also edit pictures and load applications with ease and surfing the net is easy too.

The Nokia N9 has a slew of features to wow you. For starters, there is the Quad-band GSM/GPRS/EDGE support. There is also the 3.9-inch AMOLED capacitive touchscreen, which enables you to see the screen clearly even in bright sunlight. The N9 features an 8 megapixel autofocus camera that comes accompanied with dual LED flash and is perfect for outdoor purposes. There is also the Gorilla glass display, which is scratch resistant. Nokia N9 comes equipped with the Meego v1.2 Harmattan OS and a quite strong processor, having 1GHz Cortex A8 CPU. That’s not all though. There is also the PowerVR SGX530 GPU, and 1GB of RAM along with TI OMAP 3630 chipset as well as Wi-Fi 802.11 b/g/n, to make the N9 a complete package. For storage, there is 16/64GB on-board storage and the audio jack is the standard 3.5 mm one. A microUSB port, a built-in accelerometer and proximity sensor add to the host of other features. All other standard features of a smartphone are there too, like the Bluetooth v2.1 with A2DP and EDR and DivX and Xvid support.

The Nokia N9 scores quite high with its AMOLED screen and great colored plastic encasing. Nokia has come out with great product design having anodized aluminum chassis’, like the N8 and E7. In many ways, the Nokia N9 is similar in looks to the Nokia Lumia 800 Windows phone. There are only minor differences like the relocated flash. Nokia also uses polycarbonate and the colors the N9 comes in (black, cyan and pink) are deeply pigmented with polycarbonate. This ensures that the phone has the same color as it had the day you bought it.

With the MeeGo Platform, the Nokia N9 is a refreshing experience and the button-less phone is a nice new concept at that. The MeeGo platform is definitely novice but in terms of features, it is second to none. Moreover, the device promises adequate support, so that you do not have to face any problem while using the device. In a nutshell, it’s just the right gadget for those who are new to smartphones.

Samsung to receive $1bn from Microsoft for...

The 10 most beautiful cellphones you can’t...

Where i can get cheapest cell phone?