Nokia Lumia 710 is the second Windows-based phone on offering from Nokia. Priced at Rs 14400, it is basically a low cost Nokia Lumia 800, with almost the same features but with less polished looks. The astounding 3.7-inch display, with replaceable, colorful back covers, makes the phone suitable for just any age group. The basic body of the phone comes in only two colors: white and jet black, while the back covers are available in five bright colors including black and white. Other than the impressive looks, the handset has a powerful processor of 1.4 GHz and the same GPU as Nokia Lumia 800. 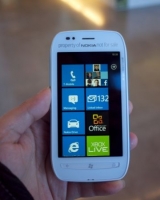 The handset has a promising talktime battery life of 1.5 days. The call quality is also very impressive. The voices can be clearly heard with no problems of static or background noises. The phone doesn’t demonstrate any problems of call drop or inaudible voice. However, the on board speaker quality is not at all satisfying. The stereo headset is not as powerful as it should have been considering the other qualities of the phone. However, the voice is definitely audible even in a highly crowded area. Apart from these, the handset faces no problems of software. Unlike many other high-end smartphones, the Nokia Lumia 710 has not let itself down with software problems, like hanging and suddenly phasing out and dying. The software is smooth enough to carry out every operation.

The overall features available in this handset are quite satisfying, but the 8GB internal memory of the phone has definitely let it down among its competitors. Backed up with a powerful 1.4GHz MSM8255 processor and 512 MB RAM, the phone is good to go for those who like to explore and store the entire world in their mobile phones. With the availability of modern connectivity features like 3G, GPRS, EDGE, HTML 5 and Wi-Fi, you will be able to connect and share important things with your friends and colleagues whenever and wherever you want. The handset provides you the freedom to click amazing pictures with its 5 Mega Pixel Camera. Still photography is superb, however, you won’t have the same feeling with the video quality.

Apart from these, the touch screen quality of the phone is quite nice. The fast UI makes it a breeze to browse pages and pictures. With the Nokia Lumia 710, you will never feel away from your work. You will be able to handle your official works with this magical wizard in the form of Microsoft Word, PowerPoint and Excel sheets from anywhere around the world.

Frankly, the design of the Nokia Lumia 710 is nothing overwhelming, but it cannot be definitely termed as anything awkward. However, the light weight of the handset has definitely imparted a cheap feel to it. Putting on some more weight could have lifted up its reputation.

The design is definitely not a surprise-stuff as the Nokia Lumia 800 is and the presence of a bit too many physical buttons have weighted down the feel and need of the touch screen. The handset has a popular and predictable Nokia design, but the absence of a front camera for a phone of this level is quite mysterious.

Again, the feature of changeable back cover is a bit too confusing. These features are normally available in youth-targeted handsets, but the Nokia Lumia 710 seems nothing like that. Most probably, Nokia has mistaken identifying its target market. However, the sturdy looks of the phone combined with the playful and colorful back covers have managed to achieve quite an over-all impressive looks for the handset.

Although the Nokia Lumia 710 is definitely not a “feel-special” phone, but investing in this smart looking handset should not be a regretful thing. Though the ultra-light trendy handset has failed to enlist itself in the list of one of the most sought after smartphones. The phone has not been able to fulfill the expectations of the buyers. The second smart phone from a banner like Nokia should have been more powerful and breathtaking than what it is. But I guess, the expectations were a bit too high. The phone could have launched like a rocket, had its design was made more refined and polished. But nevertheless, considering the features and the price tag, this smartphone can definitely prove to be a smart buy for any gadget geek.

How can I make the volume control...