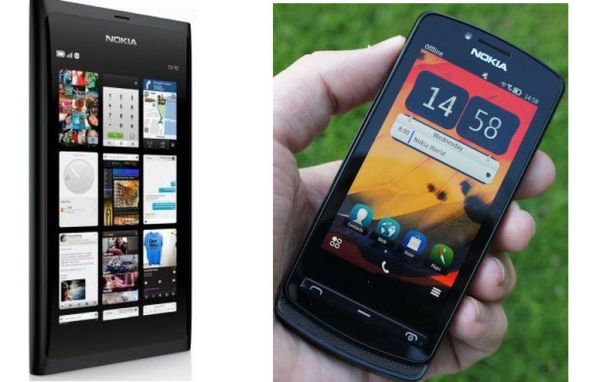 Nokia N9 was announced on June 2011 while Nokia 700 was announced on August 2011 and both the products are available from September 2011. Both the products are from the same manufacturer, Nokia makes the brand name factor trivial. But there are lots of other attributes to consider such as, the size and weight, design and UI, hardware and software, photography and navigation.

The Nokia N9 is powered by 1 GHz Cortex A8 CPU with 1GB RAM and runs on MeeGo 1.2 Harmattan while Nokia 700 is powered by 1 GHz ARM11 processor with 512MB RAM and runs on Symbian Belle platform. Nokia N9 is faster than Nokia 700 due to its processing power and RAM but Nokia 700 running on symbian platform has the upper hand in software and applications as there are plenty options out there. Nokia N9 running on MeeGo has a limited options for application and software.

The Nokia N9 comes with an 8 megapixel camera with Carl Zeiss optics with wide angle lens, large lens aperture for faster and better photos even in low light conditions. The camera comes with dual LED flash, digital shutter and continuous autofocus with focal length varying from 3.77 mm to 28 mm and it can record 720p HD videos at 30 fps. On the other hand Nokia 700 comes with a 5 megapixel camera optics with face recognition software. The camera comes with third generation LED flash with fixed full focus with focal length 4.3mm and it can also record 720p HD videos at 30fps. Of the two phones, Nokia N9 has better optics, more in depth picture with 8mp carl zeiss lens, better flash and camera settings.

Nokia N9 and Nokia 700 are both powered by 1Ghz processor but Nokia N9 has double the Random Access Memory than that of Nokia 700 which makes Nokia N9 a lot faster than Nokia 700.

The Nokia N9 is priced around $ 677. The price of Nokia 700 is $ 372. Both the phones are equipped with many features yet there are some features one should look up before getting a smartphone. Considering attributes like screen size, display, camera, battery life, software, music and sound, Nokia N9 seems to have the upper hand. But if you consider price, applications, and bluetooth connectivity Nokia 700 seems to have the upper hand. All in all Nokia N9 is much better phone than Nokia 700.

How can I register myself on XDA forum?

can wowwee robots do daily chores?