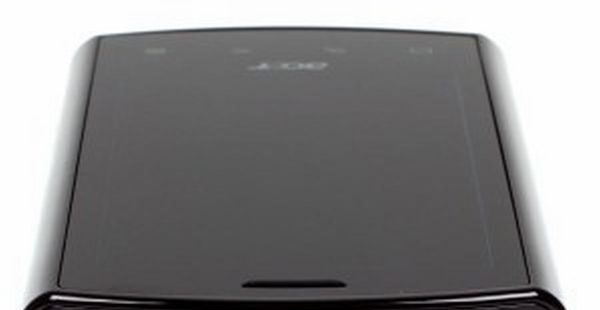 Mircromax continues to pack the ‘max’ in the ‘micro’ budgets! The X600 is a candybar, touchscreen phone and it is available for under Rs.4000. Like all its other handsets, the X600 can hold and operate two GSM SIM cards. Thus, separating work like and personal life as far as phone calls are concerned, gets easier. The first glance reveals something odd in the phone – two ‘green’ call buttons and two ‘red’ end buttons on either ends of the screen. This oddity is rather a uniqueness because the X600 has a built-in gravity sensor which allows you to switch between the SIMs by simply rotating the phone! 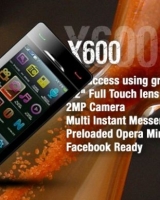 Call quality and reception are as good as any other good mobiles in its category. The GSM 900 and1800 MHz assure the user of a clear and good network in any situation. The X600 comes with a truly class music player. There has been no compromise on quality of music playability and the player supports almost all the known music formats which include MP3, AAC, AAC+, WAV and AMR. The built-in FM radio functions well. The 2 MP camera arrives with autofocus – something that many higher-priced phones do not feature. The same camera can also record decent videos. The Li-ion, 1000 mAh battery is an average one with its 5 hours talktime and a standby time of 8 days

Apart from the already stated dual-SIM advantage with the gravity sensor, the handset features the Opera mini browser, a Facebook app and the Nimbuzz multi-messenger. A 2 MP camera takes images which get displayed on the 3.18-inch resistive touchscreen. The phone has been EDGE and GPRS enabled for speed and comes along with its own music player and FM radio. The 4GB expandable memory allows you a decent storage facility.

The Micromax X600 looks elegant and stunning, way above its price range. But this is a case where you can afford to judge the book by its cover for the body is tough and durable also. The keypad has been fitted in the perfect place to allow sufficient space for the user to flip the phone and use it via its gravity sensors. Thus, the ‘call’ and ‘end’ buttons are located on either sides of the screen. The handset weighs less than 110 grams and is thus a pleasure to carry around. The camera is on the back and it lies on the top or bottom based on the SIM you are using! Again, one of the ends – top or bottom – features the 3.5 mm universal jack. The black elegance is sure to thrill hearts!

Micromax always strives to arrive with the best low-end phones or the cheapest high-end phones – however you wish to see it. The X600 fully satisfies these criteria. Its price definitely places it in the bracket of low-end phones but it gravity sensors, touchscreen and dual-SIM capability places it along with higher-end phones too. The phone allows the user to take advantage of different calling plans and store away all the contacts in a single place. With its good features, this would be the phone of choice for any teenager wanting a ‘first phone’. It also perfectly suits those professionals who have a lot of ‘phone-work’ involved as part of their office routine.