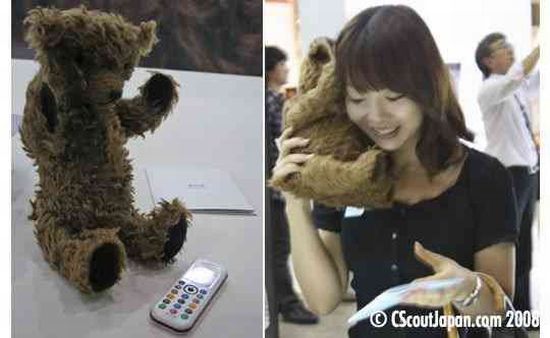 With the world closing in on Nano technology, smaller and more potent gadgets keep hitting the market from time to time. In such a scenario, something that reverses the tide mostly meets a sore eye but then the Japanese have their own way of thinking and they really don’t care about the world. They adore some real bizarre gadgets and the direct entrant into that category is the Kuma Phone from Willcom. Kuma means a bear in Japanese and thus the Kuma phone is a bear phone. Yes, you got it right, it is a phone within a teddy bear and you can make calls using that bear. The tail acts as the button that helps one answer and disconnect whilst the four paws act as receptors for speed dials. Since Willcom is a PHS mobile service provider, the SIM card lies within the teddy bear. Heavily popular at the 2008 Good Design Expo, it is now going into mass production with a price tag of not more than $500. Crazy how the Japanese are ready to shell that much for a teddy bear phone!

Samsung taking performance one step forth with...