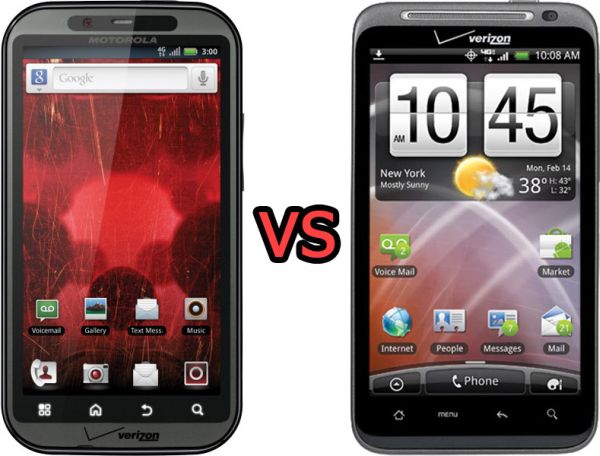 First it was a Motorola Droid Bionic and HTC EVO 4G match. Then the contenders were Bionic, HTC Inspire, LG Revolution and Revolution XE. Now, it has come full circle again – this time the smart world of mobiles is talking more of HTC ThunderBolt facing stiff challenge from Motorola Droid Bionic. Which way does the scale tilt? The HTC Thunderbolt has already stolen the show with its powerful multimedia effects. Motorola’s Droid Bionic has started the show with its processor power. While Motorola uses dual-core 1GHz processor, HTC Thunderbolt feels left behind with its single-core 1 GHz processor. While comparing the two, one feels it easier to talk about identical features of the two than counting differences. Both use the same Verizon carrier and they have no difference when it comes to Android 2.2 Froyo operating system, data speed, 802.11 b/g/n WiFi abilities, Bluetooth 2.1, aGPS, Android Market apps and Virtual QWERTY keyboards. However, their technical specs are going to be the deciding ones. Then, there is that all important consideration of costs too. And, one could always hope a faster and more glamorous one to spring out of their stable and take the ringing mobile world by surprise.

In the mean time, HTC and Motorola have their individual qualities well spread out for the customers to see and decide the choicest one. If a customer develops a love relationship with HTC ThunderBolt, it can be firmly protected from theft. Just create an htcsense account at htcsense.com and register the phone. If it is lost by accident or stolen, all personal info can be instantly reserved and a third party entry can be denied in a steadfast manner. But, when it comes to transferring the power of technical advances to the market, it seems really sagging. Thunderbolt is an HDMI version of its predecessors from the same company. Its single-core 1GHz processor does not carry the technical advantages forward to its customers. Yet, its internal storage, more than that of Motorola Droid Bionic and a bigger memory are clear vantage points. For users, who handle the 4G LTE, Thunderbolt is a more comfortable option.

How do you like those special features when you are offered a phone that can double up as a laptop? Yes, Motorola Droid Bionic has the capability of functioning as a laptop. One just has to go for that innovative accessory called Motorola LapDock. Does Motorola Droid Bionic really provide such prowess to its customer? Everything about Doid bionic tells it does! Its Modified MotoBlur interface, upgraded version of Adobe Flash 10.2, 16GB storage space on-board and microSD slot for capacity expansion of up to 32GB, 512 MB RAM, 2048 MB ROM are all measured to allow maximum usage of this smart phone.

But, some find Droid Bionic a bit lacking as it does not support games at once. HTC allows the user to get absorbed in his most liked super games. Thunderbolt has a total of 40GB active memory. Its speed is unmatched and it surpasses all fields mobile phones previously went along. The reason is its second gen 1ghz processor (actually 1.2ghz) processor, very likable LCD screen and a 1.5 front facing camera. And Droid Bionic has promised to upgrade its operating system to Android 2.3 before the end of this year.

When one has assured himself about the features he/she needs in a smart phone, it becomes a bit easier to decide upon the exact handset to go for. One knows for certain that HTC Thunderbolt flashes on the counts of display, call quality and audio, expansion and output. Motorola Droid Bionic impresses with its design, performance and battery life, software and user interface and its front facing powerful cameras.

Only two things remain now to be looked into – vital stats and comparative costs of the two phones. Let us start with Bionic. It is a bit heavier than ThunderBolt. Droid Bionics weighs exactly 5.8 ounces that is 0.2 ounces less than the contender Thunderbolt’s 5.6 ounces. One does not call it a tell-tale difference. In fact, one does not even notice the difference if not informed in advance. The two do not exhibit much of a difference in their size either. A ThunderBolt measuring 4.8 x 2.6 x 0.5 inches is not a significantly-easier-to-handle device than Bionic that measured 5.0 x 2.6 x 0.4 inches.

While HTC ThunderBolt feels a bit pricey at $250. Motorola Droid Bionic, now the more admired one, ships for $300. The die is cast now…!!!

iPhone 6 is floating in the wave...

How to connect huawei m750 to internet?

Where can I get iPod commercial songs?

What is the release date of droid...

What is causing problem in turning my...